As many edtech companies benefited from the disruption of the pandemic, attracting wads of cash from investors globally, it did feel like African startups were left out. Well, not anymore: Two-year-old startup uLesson announced today that it closed a $15 million Series B round.

The investment, which comes 11 months after uLesson raised a $7.5 million Series A, was completed by five investors: Tencent, Nielsen Ventures, and existing investors Owl Ventures, TLcom Capital and Founder Collective. It is the largest disclosed investment in an African edtech startup.

Founded by Nigerian serial founder Sim Shagaya in 2019, uLesson came into the market when the pandemic hit last year. As a young company, it has had to switch business models a couple of times to see what sticks in a very tough African market.

The startup first launched by providing a product pack of SD cards and dongles with pre-recorded videos for K-12 students. They can either access lessons via streaming or use the SD cards to download and store the content.

But uLesson has introduced new features for an all-encompassing edtech play for this demographic. It added quizzes and a homework help feature to connect students with tutors from universities. The startup also launched a one-to-many live class feature with polls and leaderboards and a one-to-one live experience for DevKids, a coding class independent of the core uLesson platform.

DevKids has since been rolled back, though. Shagaya said uLesson is making efforts to introduce the feature — which started as an experiment in teaching kids how to code and at some point made 30% of the company’s revenues  — into the uLesson platform by January next year.

“What we want ultimately is different strata of free users that can use the app and can pay for a premium experience to attend live classes or get the homework helper,” said the CEO, who also founded e-commerce platforms DealDey and Konga.

“And because parents do want to invest in the best for their kids, one of the ways you can do that is personalized one-to-one instruction for their children, whether in coding through DevKids or math or science or English.”

These features show that uLesson is now in the online home tutoring business; it is a market where most African edtech startups have not made significant headway despite an apparent need. But uLesson is taking a distinct approach by building around that single proposition as a feature, while other platforms have instead sought to sell home tutoring services as a product.

The variety of uLesson’s services provides a stickiness (students spend an average of 57 minutes on the app) that has led to parents investing in smartphones for their kids’ schooling either independently or via uLesson’s “device+plan” bundle, which is only available in Nigeria.

So far, the uLesson app has 2 million downloads, the company said. Over 12.3 million videos have been watched, with 25.6 million questions answered on the platform.

Surprisingly, uLesson kept growing despite K-12 students going back to school. Contrary to public perception of the product as a second option for K-12 students, Shagaya said uLesson has become ingrained in everyday schooling activities for its users.

In this case, uLesson adopts a diversified method of charging schools and their stakeholders. While some schools, especially high-end ones, take up the cost for their students to access uLesson, others pass on the cost to parents via tuition fees or recommend the product to parents, who proceed to pay for it individually.

“Schools have become a big channel for us, and half of our subscribers are using us in schools,” he said. “We see all kinds of interesting applications for we build, and these are some of the leading schools in the country. So we’re not supplemental from that point of view.

“Our vision is to create these feedback loops between teacher and learner and parent and school that embraces virtuous cycles and feed themselves to the betterment of the educational system.”

The company uses 180 field sales agents to onboard schools and individual users across Nigeria, Uganda, Kenya and Ghana, the countries receiving the most marketing attention from uLesson.

The platform is available in other markets, such as South Africa, Sierra Leone, the UK, Liberia, Gambia and the US, but Shagaya said uLesson has spread in these countries via word of mouth. Nigeria remains uLesson’s largest market by far, said Shagaya. The country is responsible for 85% of uLesson’s paying users.

The company said its live lesson demand grew by 222% since its introduction in September. Regarding learners’ performance, the Abuja-based startup claims that some learners have moved from the 50th percentile to the 90th percentile in their classes.

In August, uLesson introduced offline centers. While these spaces were destinations for learning, going forward, they will be places to educate the public on uLesson’s importance and sign them up, said Shagaya.

“We’re going to be rolling out a lot of these things next year because we’ve seen that this is [how] people use them,” Shagaya remarked, adding that “2021 for us was a year of testing what works and we know what works now. So there’s a lot of experimentation in 2021. And 2022, it will be executing on what works.” 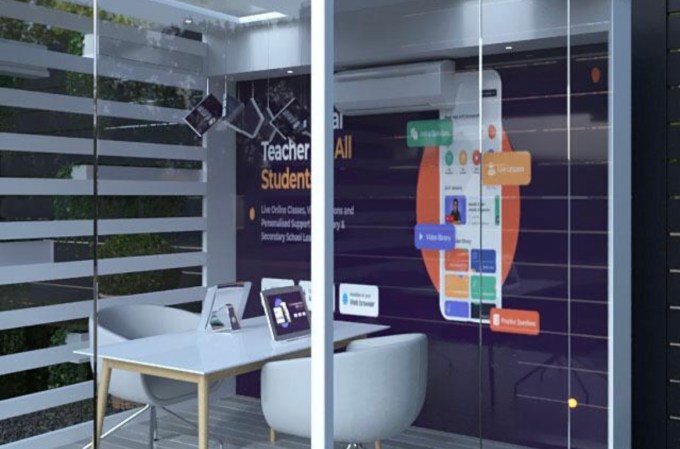 In a statement, David Frankel, the managing partner at Founder Collective, compared what uLesson is doing with education in Africa to how Uber changed transportation and Coupang altered e-commerce in the U.S. and South Korea.

He adds that he is an “enthusiastic supporter of Shagaya and his vision for more accessible and affordable educational opportunities for millions of people.”

Early this year, uLesson brought on Owl Ventures as a strategic investor in its second round of funding. It has included another in the form of Chinese tech multinational Tencent in its third round.

The tech giant and Owl Ventures back Byju, the world’s most valuable edtech. It’s too early to say, but with both companies in each other’s radars (as a result of sharing similar investors) and given the Indian company’s acquisition spree in the past three or more quarters, uLesson might likely become an acquisition target should the $18 billion behemoth be interested in Africa.

Shagaya offered no comment on that speculation. Instead, he’s particularly excited about getting Tencent onboard as the tech giant’s first edtech investment in Africa.

Tencent has made a couple of fintech investments in Africa, most notably Paystack, and recently completed two new investments in South Africa: payment gateway Ozow and challenger bank TymeBank.

“Tencent historically has been a prolific investor in edtech. They have a lot of learnings and that’s evident when you talk to them and the investments they’ve made not only in China but in India and across the world,” Shagaya commented. “In them, we saw the partner that was willing to kind of get in here, work with us, and then give us the fuel to double down on what works.”

The new capital will allow uLesson to continue to invest in product development, strengthen its core technology and add cohort-based learning features, said the company.

It also wants to expand its science and mathematics content to include “social sciences and financial accounting to the secondary level content library and qualitative and quantitative reasoning to the primary level.”

Mambu nabs $266M at a $5.5B valuation to double down on embedded financial service and banking APIs