Amazon moving forward with air drone deliveries in the U.S. 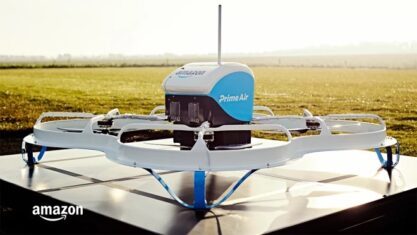 Amazon is back at the drone drawing board with plans to launch its first drone delivery service in the United States.

The drone delivery service, which was initially announced back in 2013 by Amazon executive chairman, Jeff Bezos, will soon start operating in Lockeford, California.

Delivery with drones on thousands of everyday items in one hour or less.

Amazon says ‘sense-and-avoid’ features have been added to the drone to navigate around any obstacles in both air transit and when landing on the ground.

In 2019, Amazon showed off the first drone model at its re:MARS conference

As for Canada, there’s confirmation of the drone service making its way here, though the e-commerce giant has been testing using drones for delivery here dating back to 2015. Drone Delivery Canada has also been working in the drone delivery space for several years.

Amazon is still awaiting permission from the Federal Aviation Administration (FAA) to launch the service.

Sources: Amazon Via: The Verge