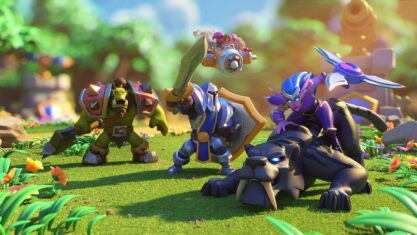 Blizzard has been teasing a Warcraft mobile game for some time.

Now, the company has formally unveiled the title, but it’s perhaps not what fans had in mind.

Enter Warcraft Arclight Rumble, a free-to-play strategy game in which players build armies made up of signature Warcraft enemies. Altogether, Blizzard is promising more than 60 characters from the Warcraft universe, including Warsong chieftain Grommash Hellscream and Archmage Jaina Proudmoore, who all appear in Arclight Rumble as tabletop sculpture-esque miniatures.

Specifically, Arclight Rumble has players assigning Leaders and filling the ranks with Troop minis and Powerful spells. Battles will then play out as sort of “bite-sized puzzles” in which you must successfully command your army against enemy forces from a top-down perspective. The first gameplay footage can be found below:

In terms of game content, Blizzard says Arclight Rumble features a single-player campaign consisting of over 70 missions, as well as co-operative missions and a player-versus-player mode.

The biggest question mark, though, surrounds monetization, given that the game is free-to-play. Blizzard has yet to reveal exactly how in-app purchases will work.

Warcraft Arclight Rumble will launch on Android and iOS later this year. You can pre-register on Android.

It should be noted that Blizzard parent company Activision Blizzard is currently facing lawsuits and other blowback related to allegations of a toxic “frat boy” work culture. The majority of these reports stem from Blizzard, specifically, and cite repeated instances of harassment, abuse and other misconduct.

Xbox’s May update includes the ability to create, share and view stories within Xbox mobile app