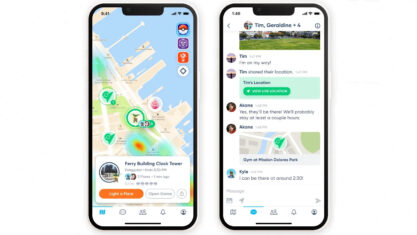 Since Pokémon Go‘s inception in 2016, players have been coordinating their location for raids and meetups on third-party platforms like Reddit and Discord. Now, Pokémon Go‘s parent company, Niantic, is launching Campfire, a location-based social-communication app for all of Niantic’s AR games, eliminating the need for apps like Discord, and giving its player base a reason to use its in-house application.

Campfire will show you a map with the location of all your friends (if they have Campfire), in-game events, communities and more, similar to Snapchat’s Snap Map. “We think of it as the “homepage” of the real-world Metaverse – a place where players can discover other players in their local area, message one another and share content, organize their own events and meetups, and foster the kinds of real-world social connections that have always been at the core of what Niantic does,” reads the company’s press release.

Campfire is already available to use with Niantic’s Ingress, and will arrive for all of its other games this summer. It’s worth noting that Campfire is not an in-app experience/plugin for games like Pokémon Go, Pikmin Bloom and Ingress, and rather, a companion app like Discord, but developed by Niantic.

With Campfire, Niantic wants to give its “community a new tool to discover the joy of real-world gameplay, meetups, and events, and to provide a way for people to discover new creations designed to make the real-world a more magical and entertaining place.”

We aren’t entirely sure when the companion app will be available for other Niantic titles, though it will be some time this summer.