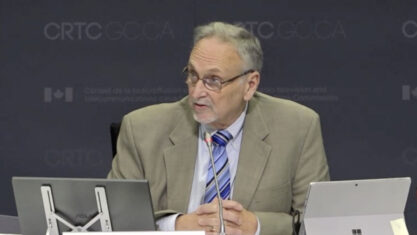 The Commission took eight months to respond to the requests, which TekSavvy says were only “partially fulfilled” in February. Under the Access to Information Act, federal institutions have 30 days to respond to requests. Institutions often impose extensions for a variety of reasons.

But if institutions fail to respond within the 30 days or the agreed-upon extended timeline, it equates to refusing to grant access to the requested information.

The party seeking the information can ask the federal court to review the process and examine if the institution was correct in refusing access.

The Information Commissioner’s office found all three delays were related to “an extended period of time needed to review the responsive records as well as additional time required to seek clarification from a third party consultation.”

According to a blog post on TekSavvy’s website, the request on Bell focused on a December 2019 meeting between Scott’s CEO Mirko Bibic.

The two met days after the telecom giant filed an application with the CRTC to overturn a ruling that would have lowered internet prices for Canadians.

Organizations, including TekSavvy and the Competitive Network Operators of Canada, have stated Scott should remove himself from decisions surrounding internet decisions because the meeting exhibited personal bias. The CRTC denied the recusal request.

Scott has since stated the meeting was appropriate, and he broke no rules.

MobileSyrup has asked the CRTC for comment and will provide an update once available.