Supply chains are made up of a web of carbon-intensive activities, and trying to nail down which company is contributing pollution along the way has been difficult to parse. CarbonChain, an early-stage startup based in London from some supply chain veterans, wants to make it easier to account for carbon every step of the way.

“CarbonChain is trying to track the carbon footprint of everything. And as far as customers are concerned, we’re specializing in Scope 3 emissions and industries where the most emissions are. And we automate that carbon accounting for companies,” company CEO and co-founder Adam Hearne told me.

Hearne acknowledged that companies will often ignore their requests for data, in which case CarbonChain makes best-guess estimates before sending them to the companies for confirmation. He said that in most cases, the companies are not disputing CarbonChain’s findings. That could be because it generally comes down to money — they need to provide carbon emissions information to their banks.

He said that the banks providing financing across the supply chain increasingly want to know the carbon position of the company receiving their money. Hearne cited a study by CDP Financial Services that found that the level of carbon emissions of a company is actually a good proxy for the stability of cash flows. 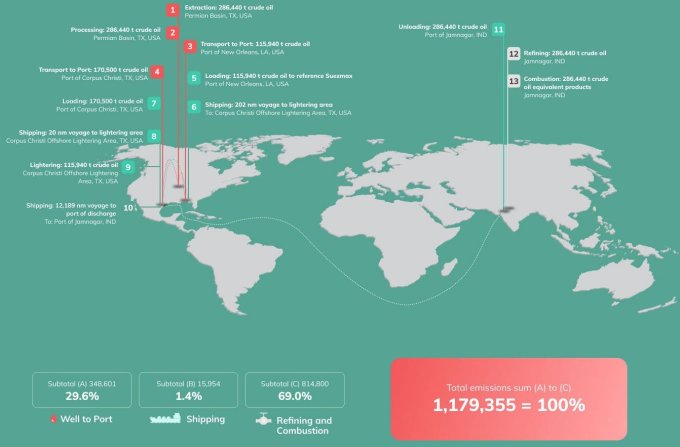 “So what they found is that if you’re financing something, and it’s very high carbon, it’s usually because behind that investment is a 50-year-old coal-fired power station, and it’s outdated technology. So it’s quite unreliable, and so you might get brownouts on that grid. Therefore, the asset is operating 90% of the time and it could be 99% of the time if it was on a new solar-plus-wind-plus-battery failover system,” Hearne explained.

While the company’s tech to measure carbon usage could be more broadly applicable, the founders chose the commodities supply chain first because they see it as the world’s biggest polluter, and measuring that pollution is the first step in controlling it.

“CarbonChain’s granular, real-time supply-chain carbon footprinting fills the data gap so that climate-critical sectors, and those who finance them, can take action today,” Hearne explained.

The company raised a $2 million seed round at the end of 2020 in an investment led by Lowercarbon Capital, a fund that invests in companies like CarbonChain trying to reduce carbon emissions around the world. The startup also participated in the Y Combinator Summer 2020 cohort.