Castor, a data catalog platform, today announced that it raised $23.5 million in a Series A funding round led by Blossom with participation from Frst and angel investors including Florian Douetteau, the founder of Dataiku. CEO and co-founder Tristan Mayer said that the proceeds will be put toward expanding the company’s 25-person workforce with a particular emphasis on the marketing and sales departments.

Castor and other data catalogs are collections of metadata, data management, and search tools designed to help users find the data that they need within an organization. Data catalogs also serve as inventories of available data, providing information to evaluate whether data is a good fit for a particular application.

Mayer founded Castor in 2020 with Xavier de Boisredon, a former data scientist at Ubisoft. The two built data catalog software that they originally tired to sell to the heads of data at Payfit and Qonto — Arnaud de Turckheim (Payfit) and Amaury Dumoulin (Qonto). But Qonto and Turckheim, sensing a larger opportunity, decided to quit their jobs and join Boisredon and Mayer in co-launching Castor.

“We’re on a mission to help people find, understand, and use data,” Mayer told TechCrunch in an email interview. “Thanks to increased automation, Castor makes it easier to bring together the context needed to understand data. We empower people to build a collaborative data culture.”

Castor provides data discovery tools aimed at helping users understand the context around data. Targeting use cases like streamlining data compliance projects and cloud migration, Castor connects to cloud data warehouses including Snowflake, BigQuery, Redshift and business intelligence tools such as Looker, Tableau, and Metabase to automatically create and update documentation that employees can refer to when they have data-related questions. 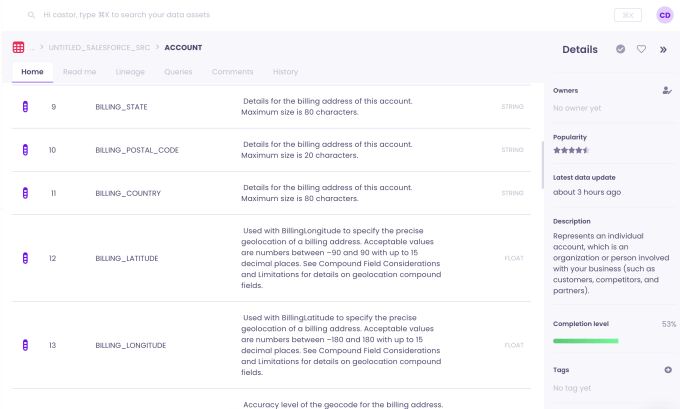 “Castor will optimize performance, cost, compliance, and security for a company’s data. A healthy infrastructure helps improve the data experience,” Mayer said. “From a product perspective, Castor’s difference relies on a Notion-like user experience that enables company-wide viral adoption, a lot of automation to bring painlessly context and data together. From a go-to-market perspective, Castor’s ‘land and expand’ pricing model and 15-minute onboarding experience makes it easy to get started.”

Castor competes with startups like Alation, Data.World, and Collibra in the data catalog space. But the company has managed to secure several big-name customers to date, including Deliveroo and Canva.

Certainly, the interest in data catalogs remains strong, but Castor has its work cut out for it where it concerns customer acquisition. According to a 2021 Eckerson Group survey, while 94% or organizations plan to deploy a data catalog, only about a third of early adopters said that their data catalog has met their expectations. Tool complexity, a lack of user adoption, and poor integration with other systems and tools were cited as the top challenges.

“Castor has close to 50 customers ranging from 50 to 10,000 employees,” Mayer said. “The platform makes a lot of sense for data and technical decision-makers, as well as C-suite-level managers. Indeed, driving company-wide alignment on metrics is extremely hard as the company grows. Castor helps them have an overview of what happens regarding data in the company — across the board.”

The latest funding round brings Castor’s total raised to $25 million.