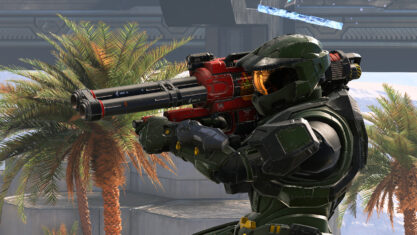 Certain Affinity, a video game studio with offices in Austin and Toronto, has revealed that it’s “deepening” its relationship with 343 Industries and Halo Infinite.

Windows Central previously reported that the studio is working on a new Infinite mode codenamed “Tanaka.”

This latest announcement from 343 Industries is likely tied to the still unknown Halo Infinite game mode. Certain Affinity is also reportedly supporting the development of the new Perfect Dark and is working on an original Monster Hunter-like game called Suerete, according to Windows Central.

We’ve been part of the @Halo franchise for more than 15 years and we’re honored to say we are deepening our relationship with 343 and have been entrusted with further evolving Halo Infinite in some new and exciting ways. Join us on our journey. https://t.co/fApGobYZS3 pic.twitter.com/XSuS7EtLcq

Tanaka is believed to be a battle royale-like mode for Halo Infinite that involves a shrinking arena and beat-em-all gameplay.

Halo Infinite’s multiplayer is available for free on Xbox consoles and PC. Season 2 Lone Wolves of Halo infinite launches on May 3rd. The much-needed update to the beleaguered game features two new maps, new game modes and tweaks to weapons (RIP to the Mangler).

I’ve spent countless hours playing Halo Infinite over the last few months, but even I’ve dropped off playing the game consistently lately. There just isn’t enough new content hitting the title, but hopefully, whatever Certain Affinity is working on injects some much-needed life into the Infinite.