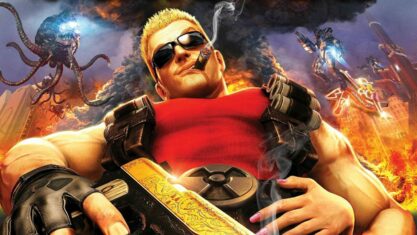 A Duke Nukem film adaptation is officially in the works. Legendary Entertainment is tapping Cobra Kai creators to bring the 1990s titular character to the big screen.

The project is based on the franchise of the now-dormant game series from Gearbox. Duke Nukem sees Cobra Kai creators Josh Heald, Jon Hurwitz and Hayden Schlossberg reunite under their Counterbalance Entertainment banner. Legendary Entertainment is also producing the film alongside Jean Julien Baronnet, who has had his own hand in video game adaptations. Baronnet previously produced the Assassin’s Creed film.

In the 90s, Duke Nukem was a wildly popular character and gaming franchise. It first began in 1991 and hailed from Apogee Software. The titular character is inspired by many 80s action heroes like Arnold Schwarzenegger, Sylvester Stallone, and others. Alongside other notable FPS games like Doom, Duke Nukem helped popularize the genre. In 1993, the sequel Duke Nukem II launched on PC. Duke Nukem 3D followed in 1996. Following its heyday in the 90s, Duke laid dormant until 2011’s Duke Nukem Forever on PlayStation 3, Xbox 360, and PC.

While there was a temporary resurrection of the 80s-inspired action hero, Duke hasn’t been seen in over a decade. Back in the 90s, the IP stood out for its self-referential and often abrasive humour. Looking back, a lot of Duke’s personality traits haven’t aged all that well, especially the over-the-top male chauvinism seen in Duke Nukem Forever.

Currently, the film adaptation is on the hunt for a writer. Additionally, the film does not have a director attached. Though, reports claim that Heald, Hurwitz or Schlossberg could fill that role. Looking at the treatment of Cobra Kai, there are some similarities between the starring character Johnny Lawrence and Duke himself. If the film can capture the depiction of an out-of-touch character in a modern world, as Cobra Kai does, there may be some potential.

A Duke Nukem film has been slowly been pitched as an idea since the late 90s with Lawrence Kasanoff signed on as producer. Even in 2017, Gearbox CEO Randy Pitchford teased that an adaptation was being workshopped.