A new report from DataDog has found that serverless computing could be entering the mainstream with over half of all organizations using serverless on one of the three major clouds – Amazon, Microsoft or Google.

The company found in a 2020 report that while some customers were using Lambda, Amazon’s Function as a Service, the other clouds lagged behind. This year’s report showed that DataDog users were using serverless tech across all three clouds with Amazon leading the way with over 70% and Microsoft and Google each over 50%, showing that it has caught on in a big way across all of the major cloud platforms.

Another key point in the report was that companies were often using serverless technology in conjunction with containers, two technologies that seem well suited to each other. Containers often have a limited shelf being deployed for as long as needed, while serverless offers the beauty of automated resource deployment.

In fact, the report found that 20% of Lambda users were deploying Lambda functions via a Docker container. That’s a marriage of serverless and containers that maybe we didn’t envision, but it’s coming into its own. When the report looked at the growth of using this approach, it found that it grew from 0% of Lambda users using this method of deployment in January 2021 to 20% by January 2022, a trend that is on a significant upward trajectory. 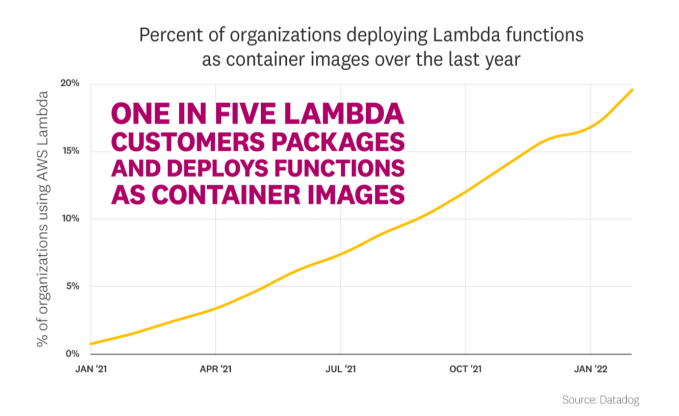 While the report surfaced other interesting tidbits, it also found that the vast majority of of Lambda functions coming through its systems were being used to invoke a single API gateway and nothing more, something that is in line with what DigitalOcean’s Gabe Monroy told us at the launch of his company’s Functions as a Service product last month.

“A developer can run a Django application or Ruby on Rails application running in containers on our platform, and then supplement that with some function-oriented APIs running alongside that same application connecting to the same data stores that they need to,” Monroy told us at the time.

The beauty of serverless overall is that developers don’t have to worry about provisioning at all, and can just code, says Ilan Rabinovitch, SVP of product & community at DataDog.

“Every one of the cloud providers is starting to offer ways in which you run your containers as a serverless mechanism where you don’t have to worry about that infrastructure, and even on the function side, they’re making it possible for you to push containers as the deployment mechanism. So instead of uploading a zip file to run a Lambda function, you upload a Docker container, and they’ll and they’ll run that for you too,” Rabinovitch explained.

Alex Cuoci, product manager for serverless at DataDog, says the increase in tooling across platforms is making serverless more accessible, and that’s why they are seeing more usage. “What we’ve heard from our customers, and we tried to emphasize this in the report is that these new technologies reduce the time and resources for teams to adopt serverless for the first time, which has opened it up a lot more to organizations and teams,” Cuoci said.

Serverless represents the ideal state of cloud computing, where you only use exactly what resources you need and no more. That’s because the cloud provider only delivers those resources when a specific event happens, and shuts it down when the event is over. It’s not a lack of servers, so much as not having to deploy the servers because the provider handles that for you in an automated fashion.

When people began talking about cloud computing around 2008, one of the advantages was elastic computing, or only using what you need, scaling up or down as needed. In reality, developers don’t know what they’ll need, so they’ll often over provision to make sure the application stays up and running.

The company created the report based on data running through its monitoring service. While it only represents the activity from its customers, Rabinovitch sees it as quality data given the broad range of customers it has using its services.

“We do think we’re well represented across the industry, and we believe that we’re representative of real production workloads,” he said. That means most likely people aren’t monitoring workloads where they are only dabbling in serverless, and that adds even more value to the data.

Serverless and containers: Two great technologies that work better together