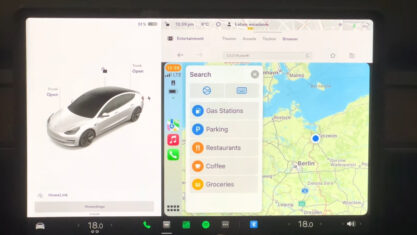 CarPlay is coming to Tesla vehicles, at least indirectly.

Michał Gapiński, a Polish developer, showed off a CarPlay hack working in a Tesla Model 3 back in January, where he said he is working on polishing the software.

Steering wheel controls + current state of #teslaCarPlay on video. Next step is to improve Wi-Fi connection, the stream is 2x smoother when viewed on my laptop pic.twitter.com/0wFFUQQPkx

Later in February, he uploaded a hands-on/preview of the software running on the Tesla Model 3/Y, with the software built on a custom build of Android 12, running on a Raspberry Pi. Now, Gapiński has polished the software and uploaded it to Github for all Tesla drivers to use.

Sources are available on https://t.co/UHhfaNq8Ow under GNU GPL v3.0

Please use the issue tracker for any install related questions!

To make Carplay work in your Tesla, you’ll need an Ethernet cable, a microHDMI to HDMI cable, an LTE modem and a Wi-Fi access point.

The way the software works is that the in-car browser connects to the Android 12 build on Rasberry Pi with a Wi-Fi access point. The browser then displays the familiar Carplay interface with features like Apple Music, Maps, and the calling UI, with all the features controllable with the steering wheel button to get the complete Carplay experience while driving.

While Tesla has consistently refused to add highly-requested Carplay support for a while now, Gapiński’s workaround is a boon for those looking to take advantage of Carplay’s simplicity in their Tesla.

Learn more about the project and how to get Carplay on your Tesla here.