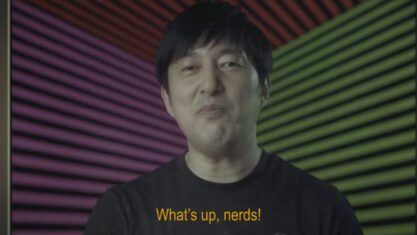 Devolver Digital is hosting another yearly installment of its digital showcase. To build up anticipation, the publisher has released a teaser video poking fun at the gaming industry and other digital showcases.

“It’s all about the countdown.”

This statement is said during the engaging and well-produced teaser. It harkens back to some of the more unrefined digital showcases in recent years, where promoted start times would merely lead to a drawn-out countdown timer. In the typical Devolver Digital style, the teaser is quirky and very tongue and cheek.

Most surprisingly is the appearance of Suda51, who shows up yelling “what’s up nerd?!” Best known for his work on No More Heroes, Suda51’s appearance seems to indicate that he will host the event.

As far as what will be shown, Devolver Digital confirms that Cult of the Lamb is making its appearance prior to its launch on consoles and PC. However, beyond that, the publisher likely has a few surprises in store.

Watch the 'Devolver Digital Marketing Countdown to Marketing' on June 9 at 3:00PM Pacific!

The ‘Devolver Digital Marketing Countdown to Marketing’ event kicks off on June 9th at 6 PM ET/3 PM PT. It is also part of Geoff Keighley’s Summer Game Fest. You can tune in on the Twitch Gaming channel.

The “not E3” season kicked off with Sony’s recent State of Play. There is also the main Summer Game Fest event next week alongside the Xbox and Bethesda Games Showcase. More details on the upcoming events can be found here.