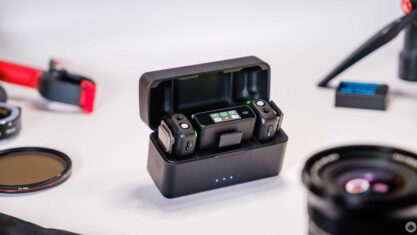 You likely know DJI for its drones or camera stabilizers, but lately, the company has expanded into more filmmaking-related markets, and its new microphone set is stellar.

Whether you plan to upgrade your phone or camera’s mic quality, the DJI Mic is exceptionally versatile and has quickly become my favourite wireless microphone system. It’s not without faults, but the useful addition of an AirPods-like charging case for the mics and the receiver is an innovative twist on a microphone system, and like with most gadgets, the longer the battery life, the better.

I’ve used this as my primary microphone system over the past month, and I think Rode and other wireless mic companies need to pay attention to all the little details DJI adds to its products.

It’s a shame the AUX cable and the wind filters don’t fit into the charging case.

The Mic features four main components, including two microphones, a receiver and the charging case. Beyond that, there are also two wind filters for the mics, a small carrying pouch, an AUX cable and connectors for USB-C-equipped phones and iPhones. 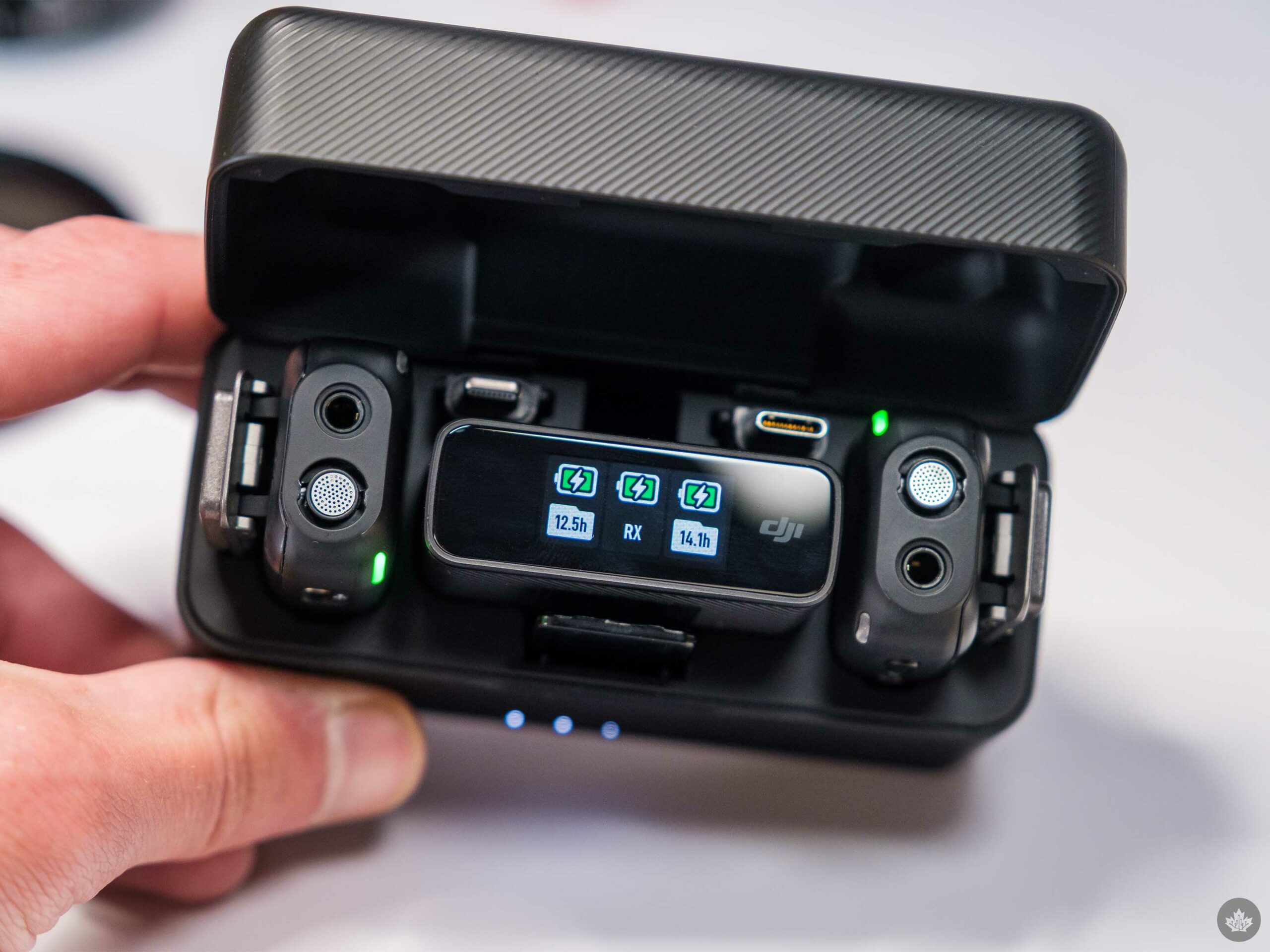 Beyond being stellar wireless microphones, the part that appeals to me the most is the charging case. At my current pace of one to two videos per week on the MobileSyrup YouTube channel, the microphone’s case has lasted weeks before needing to be charged.

DJI says that both mics last for five and a half hours, the receiver lasts for five, and the case offers enough juice for 15 more hours. If you’ve ever pulled a dead microphone out of your bag before, this little case can go a long way towards avoiding that. Plus, having a compact space to charge everything at once is useful. Instead of tracking down two mics, a receiver and three chargers, I just plug in the case, and I’m good to go.

I do wish that the receiver would last a little longer, though. There were a few instances when I was out shooting, and I left the receiver turned on, leading to its premature death. It’s not the end of the world since you can record internally to the mics, but having the receiver last ten hours, and allowing you to swap mics and keep using it, would be beneficial. Alternatively, my Sennheiser MKE 400 shotgun microphone can detect when my camera turns on/off and follows suit to help the battery last as long as possible. Adding a similar system to the DJI Mic unit would help a lot. 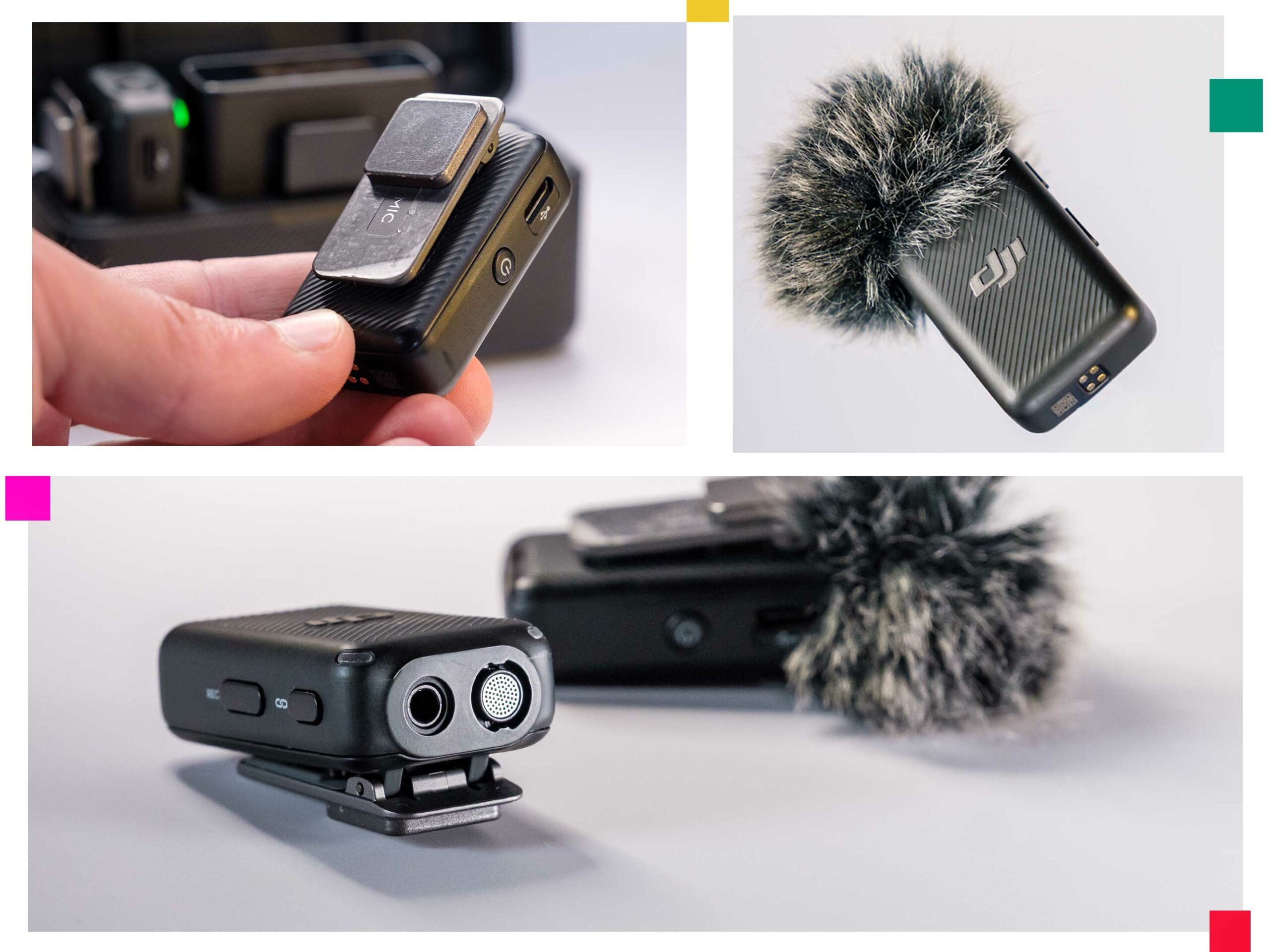 The microphone units themselves are more compact than the very popular Rode Wireless Go IIs. They also have an extended wireless range of 250 metres. This is pretty overkill for most creators, but knowing that you can pull off interesting long-distance shots with the mics is useful. That said, each microphone has 14 hours of onboard storage, so you can record on them locally and sync your audio in post instead.

Another cool mic feature is that it can record a secondary backup recording at -6 decibels to make sure that no matter what, you get the audio you need.

The mics also come with a magnet and a clip so you can attach them to a wide variety of clothing and surfaces. You could even plug a lavalier microphone into it and hide the Mic, but since it’s so light, it’s not annoying to keep it clipped to your shirt for even a day at a time. There have been many times post-filming where I’ve walked out in public with it clipped to my shirt by accident. 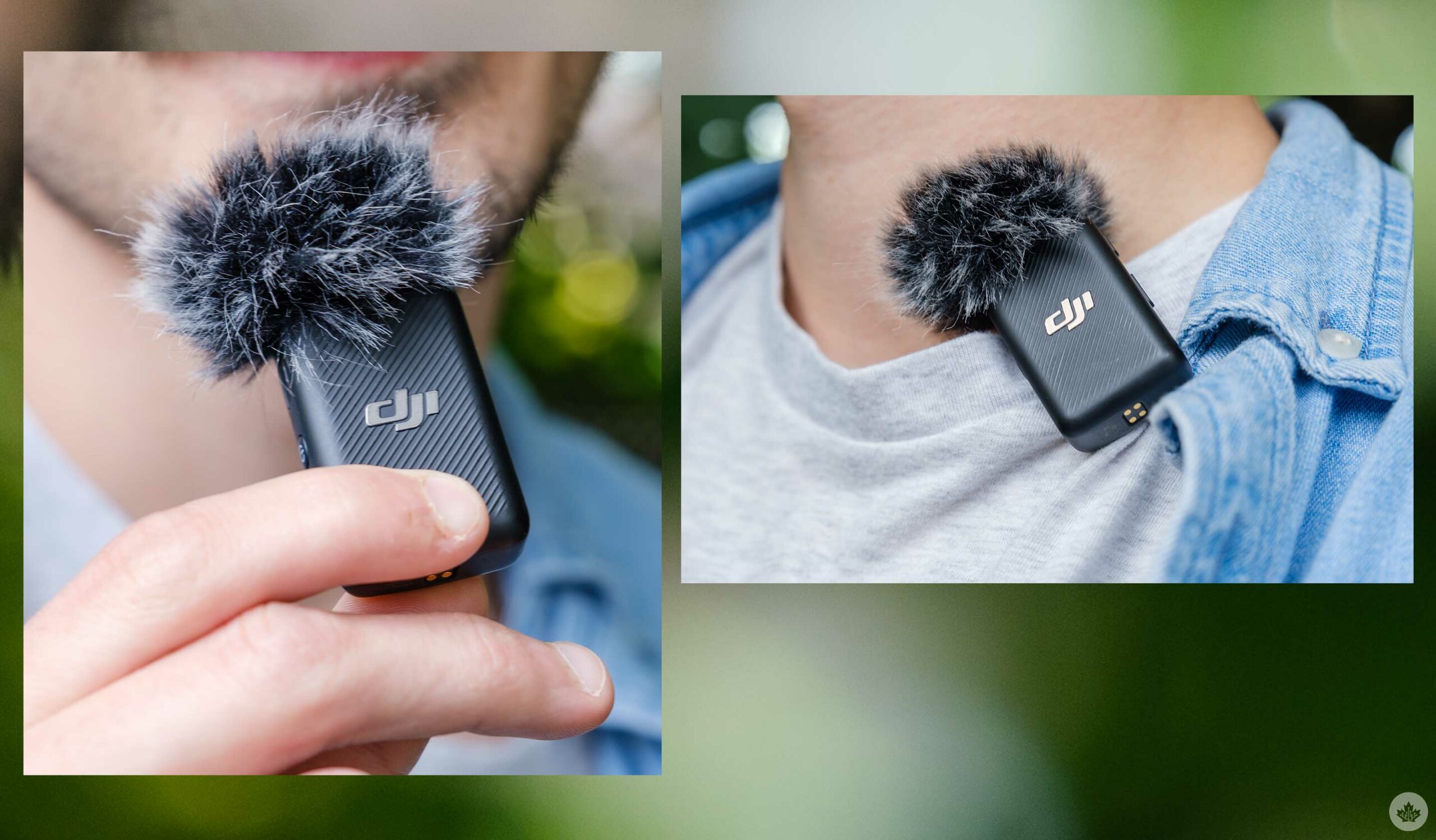 The receiver is also small, with a tiny touch screen so you can change recording types, gain and other settings on the fly. There’s a headphone jack to make it easy to monitor your levels. However, you’ll need to ensure your camera’s mic settings are levelled. I’ll also mention that the auto function worked great for me, but with Shevon Salmon’s deeper voice and my girlfriend Alex’s higher-pitched voice, the sound needed to be adjusted manually. 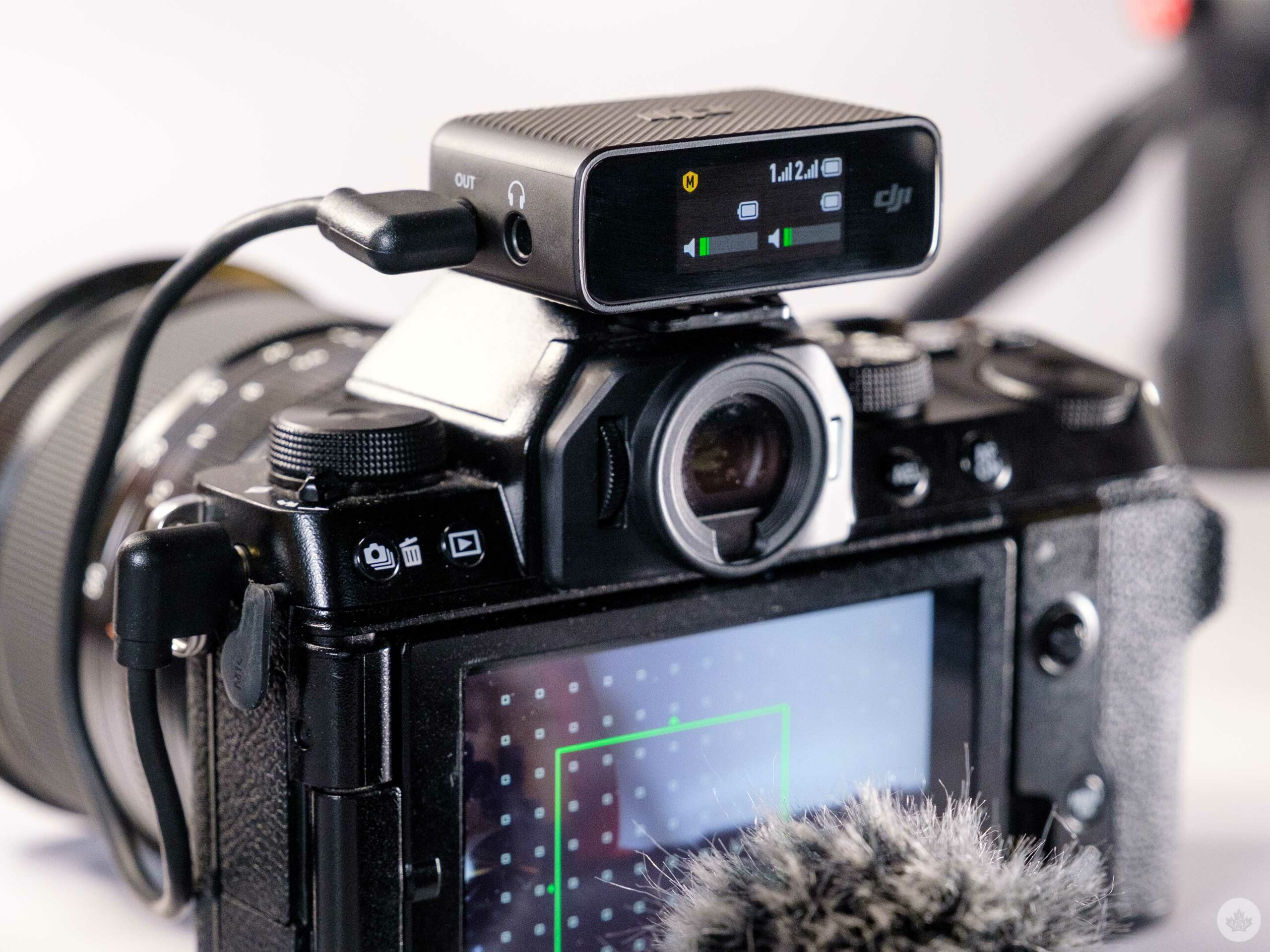 My only real gripe with this setup is that there’s nowhere to store the AUX cable or a wind filter in the charging case. The wind filter, I’ll forgive since you don’t need it every time, but having to remember the case and the separate AUX cable to connect the receiver to my camera is a strange oversight.

The buttons on the microphones could be a little more tactile as well, though this might be an issue specific to me. Still, I’ve grown fond of holding the DJI microphones up to my mouth like a tiny stage mic, but sometimes when I do, my (not so big) fingers will absentmindedly press the recording button, stopping whatever I’m doing. I’ve gotten used to this and have had fewer accidental presses the longer I’ve used the mics, but it’s something to be aware of. 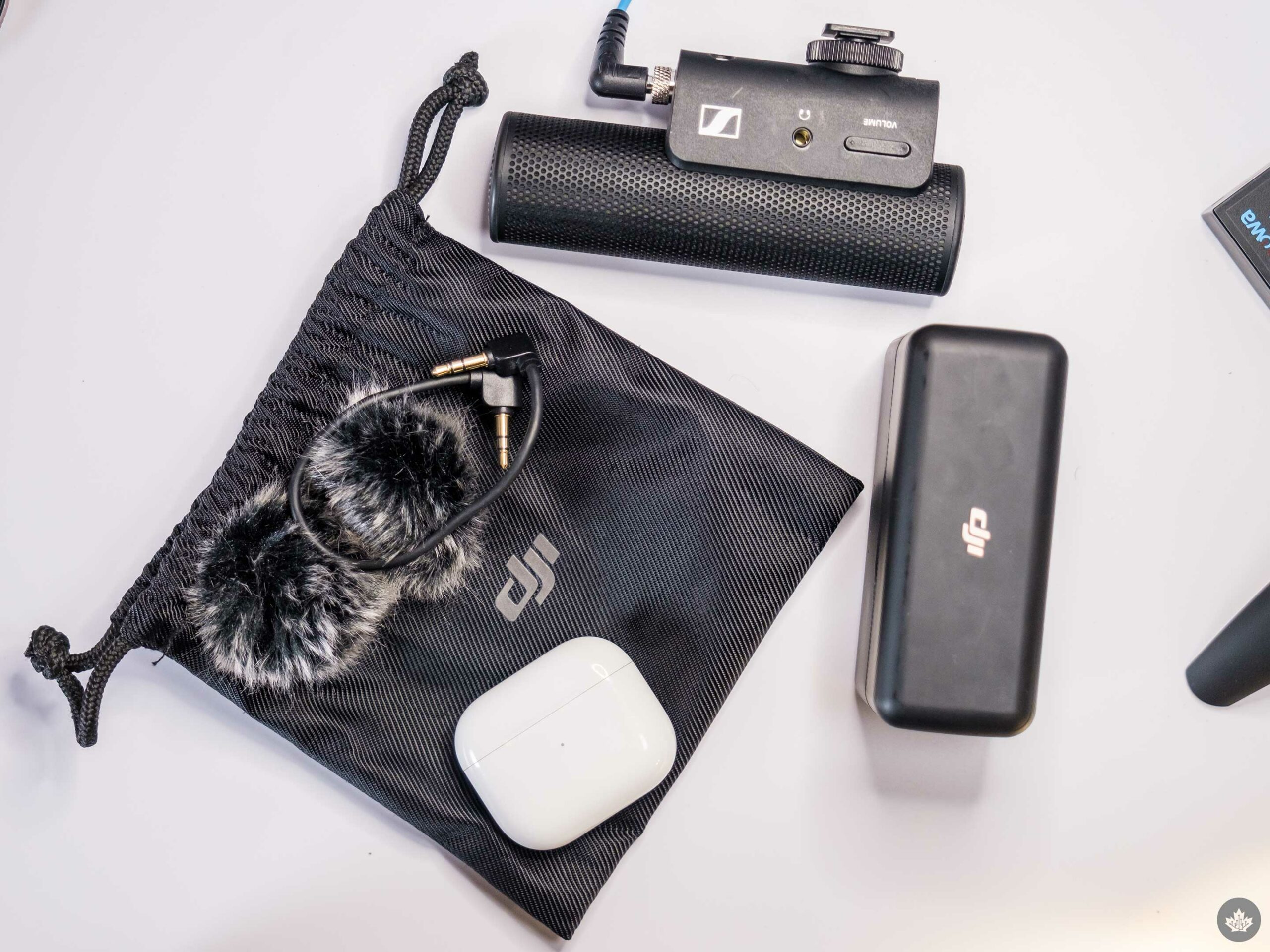 The DJI Mic gear next to my shotgun microphone and a pair of AirPods for size reference.

The receiver features a small removable camera cold shoe mount to make it easier to place on top of your camera. However, this mount needs to be replaced by the iPhone or USB-C connectors. Whenever you do this, you’re left with a small plastic piece with nowhere to go and it can easily get lost if you’re not careful. In the future, I’d love to see the next version of this offer a larger case that can fit all the components at once.

Who is this for? 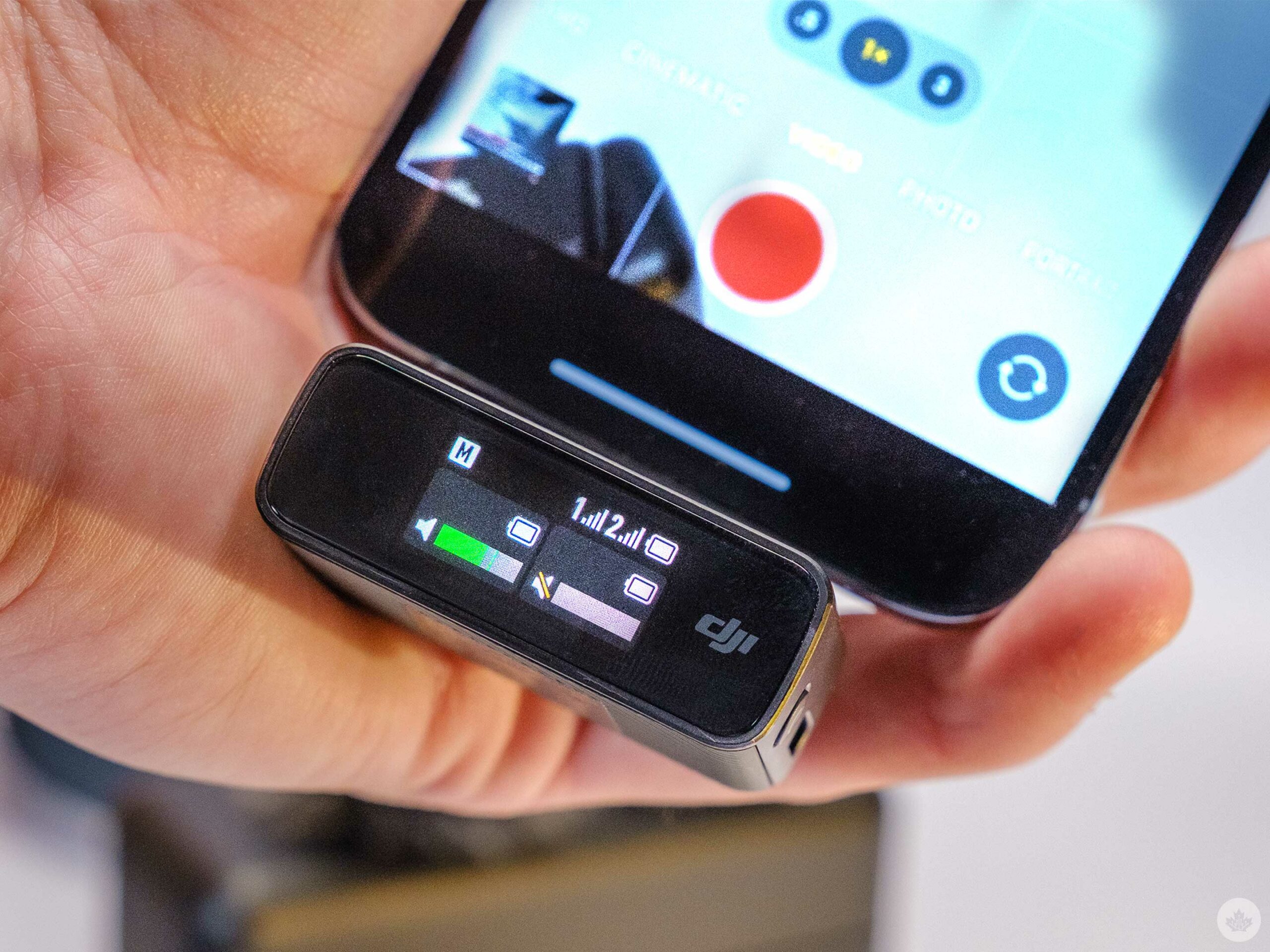 The DJI Mic receiver plugged into the bottom of an iPhone.

When it boils down to it, independent creators or people with small teams can benefit greatly from the added efficiency of DJI’s Mic. The reigning champion in the wireless microphone space has been the Rode Wireless Go II system, and the DJI microphone blows it out of the water. Plus, you can pull files off the DJI Mic like an SD card without needing to download a specific app like you’re forced to do with Rode’s offering.

Touch controls on the receivers, seamless internal recording and the charging case are three things I don’t want to go back to living without. It may be a little more expensive than comparable options, but I think due to it being a lot more convenient than the Rode system or my cheaper Comicas, it’s worth that added cost.

DJI has been building a reputation as a high-end camera accessory maker, and this new mic system follows that trend to a tee. If you’re looking for samples of the mic system, any videos on MobileSyrup’s YouTube channel starting from the OnePlus 10 Pro review have used these microphones. I think the best showcase is my video focused on the new MacBook Air since the mic is used in a pretty loud space and still holds up really well.

The DJI Mic costs $430 and is available at Henry’s and other camera retailers.