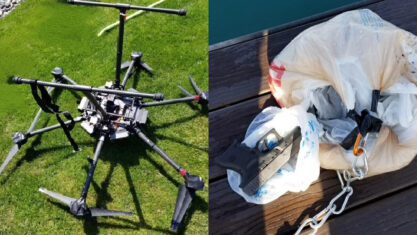 The Ontario Provincial Police (OPP) says that it is currently investigating a drone carrying handguns that was found stuck in a tree near the Ontario-U.S. border.

Lambton County OPP state that the drone was uncovered near Port Lambton, Ontario, in a tree along the St. Clair River that runs between Canada and the United States.

How are illegal guns reaching the hands of criminals in Canada? Recently, #LambtonOPP found that drones are being used to carry the prohibited guns over from the United States. This drone was located Friday morning near Port Lambton, stuck in a tree, transporting 11 handguns.^jb pic.twitter.com/SnGybiAkp3

The plastic grocery bag attached to the drone had 11 handguns inside it. The majority of the handguns are prohibited in Canada. It’s unclear what type of drone this is, but it’s substantial and looks like it’s commercial.

Police say that the drone likely came from the United States. Though it remains unclear, this was likely an attempt to smuggle the firearms into Canada.

Via: The Canadian Press (CP24)

What’s new on Xbox Game Pass on console, PC and mobile in early May 2022