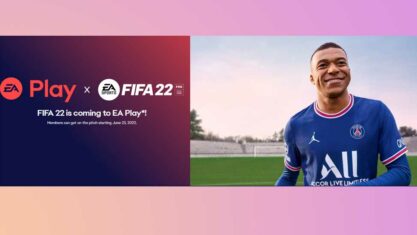 EA’s FIFA 22 is the latest game to be added to EA Play, Electronic Arts’ subscription program.

The soccer title is headed to EA Play on PlayStation 5, PlayStation 4, Xbox Series X/S, Xbox One, and PC on June 23rd.

Additionally, since Xbox Game Pass Ultimate members get access to EA Play as part of their subscription, they’ll also be able to get their hands on FIFA 22 for free.

It’s worth noting that FIFA 22 is currently available on EA Play, but as a 10-hour trial. This will change to the full-fledged game on June 23rd. “EA Play members also get additional content in FIFA 22 including FUT Stadium Sets and Season Objectives XP Boosts in FIFA 22 Ultimate Team, along with apparel and VOLTA Coins in VOLTA FOOTBALL,” reads EA’s blog post.

In other FIFA and EA-related news, the upcoming FIFA 23 will be EA’s last FIFA-licensed title. According to EA, its upcoming soccer titles would be called EA Sports FC, and would feature all the same mechanics, modes, leagues tournaments and athletes as the current FIFA titles. Read more about it below: