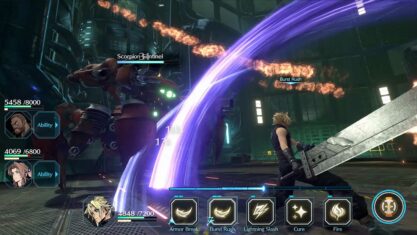 In the new trailer, we see a closer look at all of these older games (and movie) in action. Like the original Final Fantasy VII, Ever Crisis features combat based around the Active Time Battle system, a form of turn-based gameplay. In battles, the visuals are fully 3D, while character models outside of combat are blocky in a way that’s reminiscent of the original Final Fantasy VII. Character portraits and other artwork have been drawn by Lisa Fujise.

Ever Crisis will be free-to-play on mobile with in-app purchases for lootboxes, which will contain random weapons and costumes. Interestingly, while a September release has been reported by the game’s co-developer, CyberAgent, Square Enix did not confirm a date during the stream. Instead, it simply said a closed beta test is coming later this year.

It should be noted that Ever Crisis is one of two remakes of Final Fantasy. The other, appropriately titled Final Fantasy VII Remake, is a multi-game project to reimagine the events of the original PlayStation classic. The second installment in the Remake series, Rebirth, was also unveiled during the anniversary stream, as was a remake of Crisis Core.