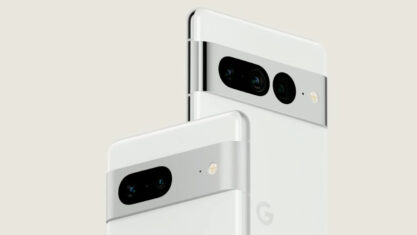 Last week we saw the Pixel 7 on eBay, and today, we’re getting a new live glimpse of a prototype Pixel 7 Pro.

Google’s upcoming handset has been shared on SlashLeaks by Piyush Bhasarkar, a leaker that doesn’t really have a great track record. That said, SlashLeaks rated this leak 100 percent accurate.

This is the first glimpse of the Pixel 7 Pro’s front. In the past, we’ve seen the 7 Pro’s rear at Google at I/O earlier this year. However, the front showcases its long display and hole-punch camera. The display itself is very similar to the Pixel 6 Pro that Google launched last year.

On the rear, we can see that the handset lacks the ‘G’ Google logo, indicating that this is a prototype and not the official device. We can also see the new aluminum finish on its visor, making it more striking than the current Pixel 6 series.

Google will launch the Pixel 7 Pro alongside the Pixel 7 and Pixel Watch later this fall. We expect an October launch like in previous years.