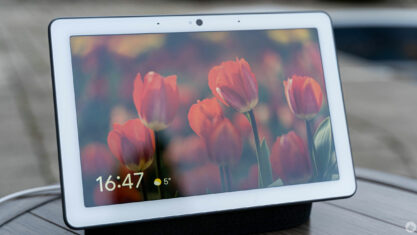 Though Google hasn’t officially confirmed the feature yet, it looks like ‘Look and Talk’ could help users more easily launch Google Assistant on the Nest Hub Max.

As first uncovered by 9to5Mac, code spotted in the Google app beta (13.14) outlines a new Look and Talk feature that would allow users to “look at the display from up to 5ft away to talk to Google.” This means you don’t need to say the usual “Hey Google” or “Ok Google” wake words to activate Google Assistant.

The feature will also work with the Nest Hub Max’s ‘Face Match’ and ‘Voice Match’ features, ensuring that Assistant matches the appropriate user.

According to 9to5Google, the code specifically says:

“Your device relies on camera sensing and analyzes your video to determine if you want to activate your Assistant. Assistant may activate when you didn’t intend it to, if it incorrectly detects you want its help. Your video is processed on-device and isn’t sent to Google servers.”

Given the Nest Hub Max is the only Nest Hub to feature a built-in camera, it doesn’t look like ‘Look and Talk’ will make its way to the 1st-gen or 2nd-gen Nest Hub. A

s someone who hates saying “Hey, Google,” the prospect of this feature making its way to the Hub Max is exciting. That said, I still just have a 2nd-gen Nest Hub and didn’t bother upgrading to the Nest Hub Max when it launched back in 2019.

Since this is still an in-development feature uncovered in a beta, it’s also important to point out that it may never get a public release. Google has yet to officially announce Look and Talk.