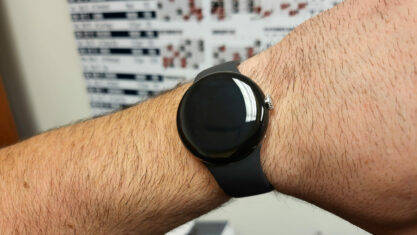 Google’s often-rumoured Pixel Watch, codenamed Pixel Rohan, is nearing its rumoured release and has already been filed as a trademark with the United States Patent and Trademark Office. Now, new information coming from 9to5Google gives us a brief overview of the watch’s specifications and features.

According to 9to5Google and its sources, the upcoming Pixel Watch will feature a 300mAh battery. For reference, the Apple Watch Series 7 features a 309mAh battery, whereas the Galaxy Watch4 40mm is equipped with a 247mAh battery, both of which offer a full day of usage per charge.

Additionally, 9to5Google‘s report also suggests that the Pixel Watch will be heavier than its competition, coming in at 36g without the straps and will feature cellular connectivity, but not on all of its models.

At Alphabet’s earnings call on April 26th, the company’s CEO, Sundar Pichai, stated that new hardware will be revealed at Google I/O on May 11th. This may be when the tech giant will finally show off the long-awaited Pixel Watch. Recently, a Redditor posted live images of the Pixel Watch.

Here are the games hitting PlayStation Now in May 2022