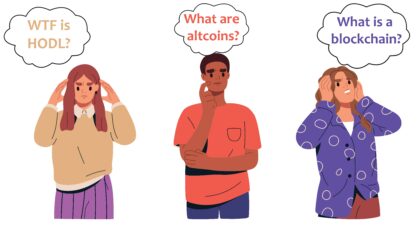 If you’re someone who joined the cryptocurrency space recently, I’m sure you’ve come across ‘crypto bros’ talking in a tongue that seems foreign. Even Merriam Webster won’t help you decipher what’s going on when two crypto bros are going at it. Here’s a simple breakdown of key crypto terminology that you might see on social media platforms every day while scrolling.

Note: Some of these terms apply exclusively to Bitcoin, but considering its dominance in the cryptocurrency space, those terms are good to know, even if you don’t plan to invest in it.

Think of a blockchain as connected blocks of data and information across a distributed ledger that works to keep a record of all transactions (or other data, but since we are talking about cryptocurrency, we’ll go with transactions) happening on a network in a decentralized manner, with no single central point of authority or failure.

Each block has a limit of nearly two to four megabytes, so in essence, once the block’s capacity has been filled up with transactional data, it joins the blocks that came before it, making a chain of data that is set in stone and cant be altered. As new transactions come in, data is fed directly to the new block, until that too reaches its capacity and joins the previous block to form a chain of data in chronological order.

If a bad actor was to alter the data in the blockchain for personal gain, all other computers securing the blockchain would see the alteration and reject it, since it doesn’t correspond with the rest of the majority. 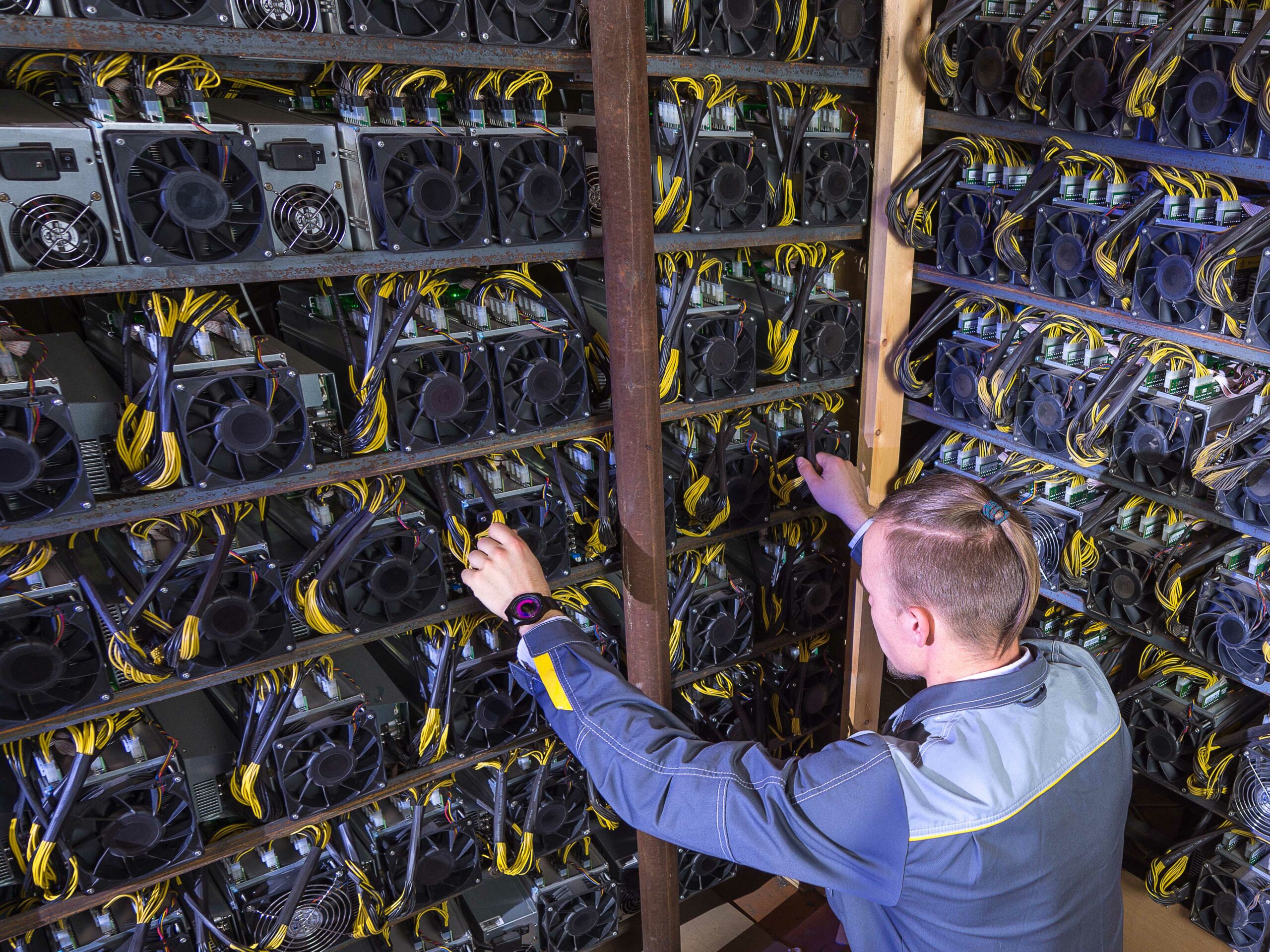 The process of creating/finding a new Bitcoin in exchange for computational power is known as mining, and it goes hand-in-hand with the blockchain. There will only ever be 21 million Bitcoin in existence, though not all of them were released at once in 2009 during the digital asset’s birth. As of right now, there are about 19 million Bitcoin in circulation

Let’s say ‘X’ is a Bitcoin miner, and has a few ASIC miners running. X’s miner’s main aim is to verify and process transactions and add them to blocks (as mentioned above). As we already know, once said block has reached its storage capacity, it links to the blocks that came before it and a new block is discovered. Each new block discovered rewards the miners who found it with Bitcoin, and that’s how new Bitcoins come into circulation.

Mining difficulty increases as more miners join the network. Currently, the reward for discovering a new block is set at 6.25 Bitcoin, which has a market value of roughly $228,534.39 CAD. On average, there are about 144 new blocks discovered per day. A reward of 6.25 Bitcoin multiplied by 144 new blocks equals 900. So, 900 new Bitcoins come into circulation every day.

Halving is the process of cutting down the rewards miners receive per block in half. Halving of the rewards takes place roughly after every 210,000 blocks have been discovered, which is about every four years. During its inception in 2009, the reward for each new block used to sit at 50 Bitcoin. This was halved to 25 in 2012, 12.5 in 2016, 6.25 in 2020 and is expected to go down to 3.125 in 2024. The process of halving will go on until every last Bitcoin has come into circulation, which is expected to be some time around the year 2140. 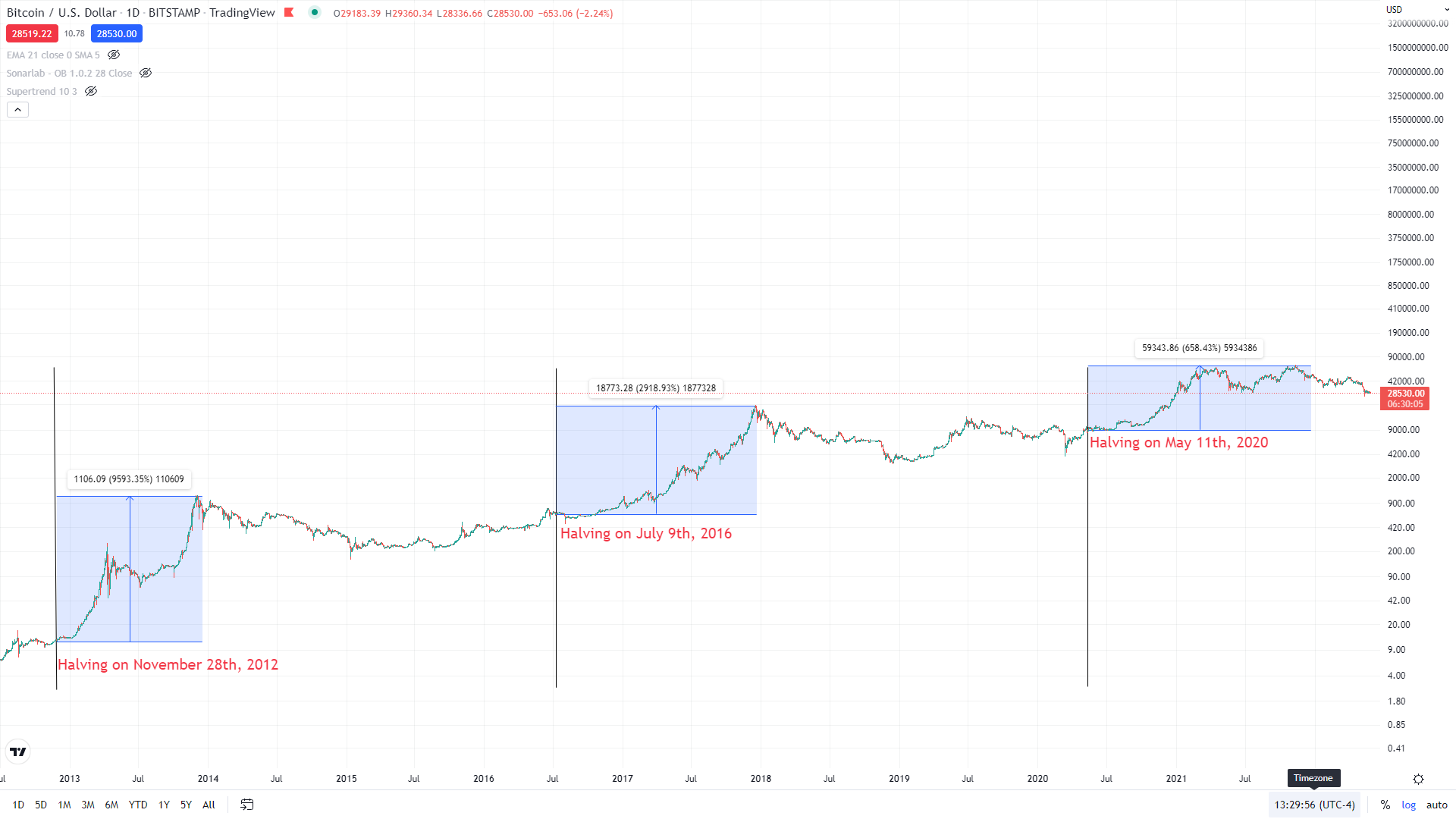 Halving has historically resulted in positive price action for Bitcoin, considering that it cuts the digital asset’s inflation rate in half, all while reducing the rate at which new supply comes in. Imagine that the Earth runs out of gold to mine, and the only new gold found is either incidental or found with extreme difficulty. In such a case, supply would be constricted (scarcity of gold), while demand, as we’ve seen over the years, will continue to grow, resulting in positive price action for the asset. 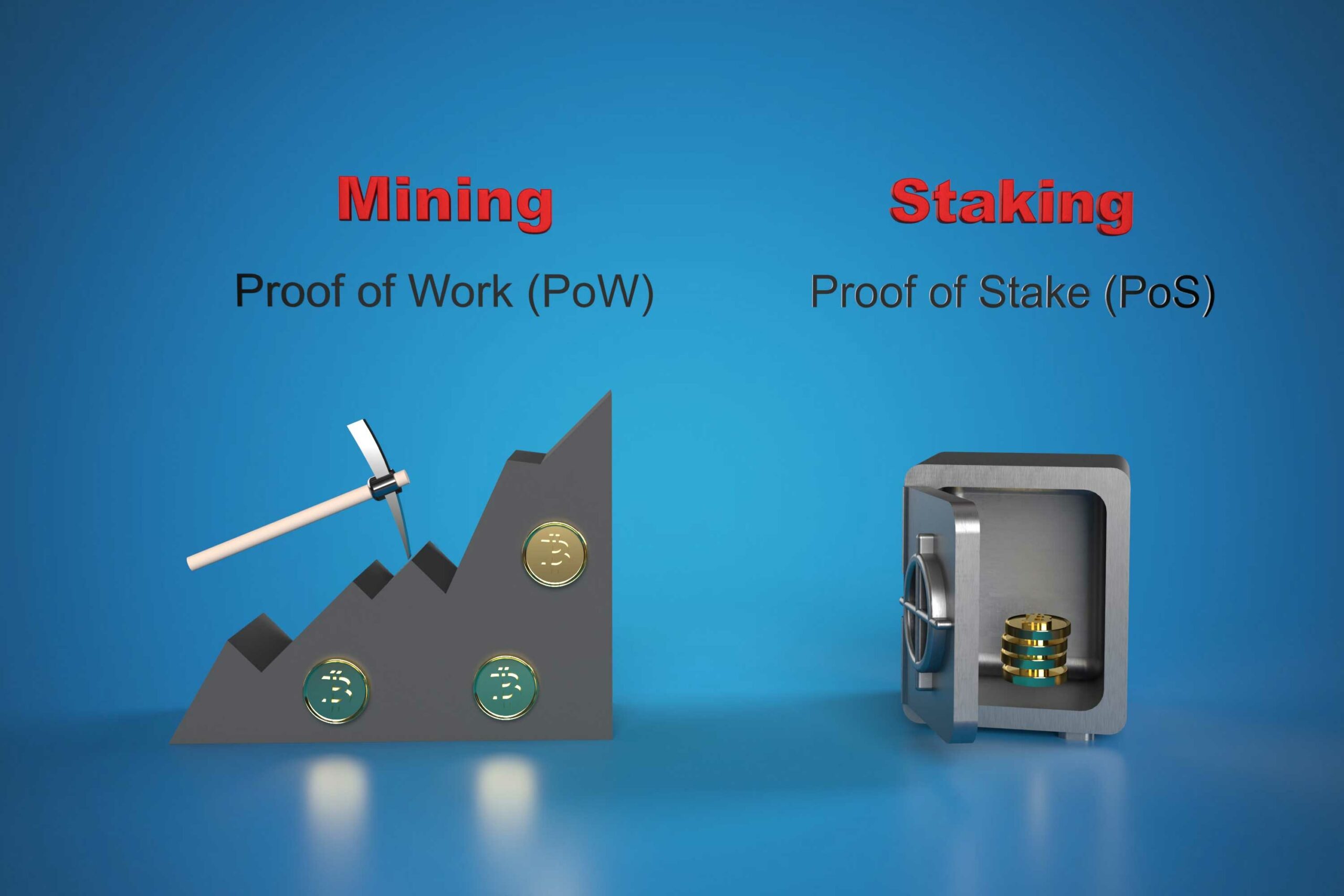 Proof-of-work is the consensus that goes behind keeping the Bitcoin network decentralized. ‘Work,’ in this case, is the computational power that goes behind mining new Bitcoins, and required miners to display that they are validating and processing transactions to discover a new block. Proof-of-work conses is highly energy inefficient and has been at the heart of criticism that Bitcoin receives.

Proof-of-stake consensus, on the other hand, is less energy-intensive and is used by altcoins like Solana, Fantom, Binance Smart Chain, Tezos, and many more. It serves the same function as a proof-of-work consensus would, by validating and processing transactions, though instead of offering computational power, validators on a proof-of-stake consensus stake the asset that they are validating in return for transaction fees as a reward from a new block. The higher the amount you stake, the more chances you have of being picked as the validator to validate a new block and receive transaction fees as compensation.

Any cryptocurrency other than Bitcoin is categorized as an altcoin. Some of the top 10 altcoins include ETH, BNB, XRP, ADA, SOL, DOT and more.

HODL is an abbreviation for the term ‘Hold on for Dear Life,’ which originated because of a typo (‘hold’ being the correct spelling) on a BitcoinTalk forum page in 2013. Considering that cryptocurrency markets are volatile (both up and down), early adopters chose to ‘hold’ the assets that they purchased during wild price swings in hopes that they will gain value in the future, instead of continuously buying and selling, which is a characteristic of a day trader.

The typo soon became a community meme, and people are still using the term to this day to signify that they will weather out the storm and hold onto their crypto assets instead of selling them.

FOMO stands for the Fear of Missing Out and is characterized by people being fearful that others are having fun while they are missing out. In terms of the cryptocurrency market, it refers to purchasing a digital asset after it has already rallied in price. The person FOMO-ing in looks at other people making money on a specific digital asset and doesn’t want to be left behind, and purchases the said asset after it has already gone up in price.

FOMO-ing in without a clear trade invalidation plan can almost always result in loss.

DYOR stands for Do Your Own Research and is typically used by social media influencers to let their following know that the cryptocurrency-related views expressed by them are not financial advice, and that new investors should always do research about specific digital assets before they attempt to invest in it. 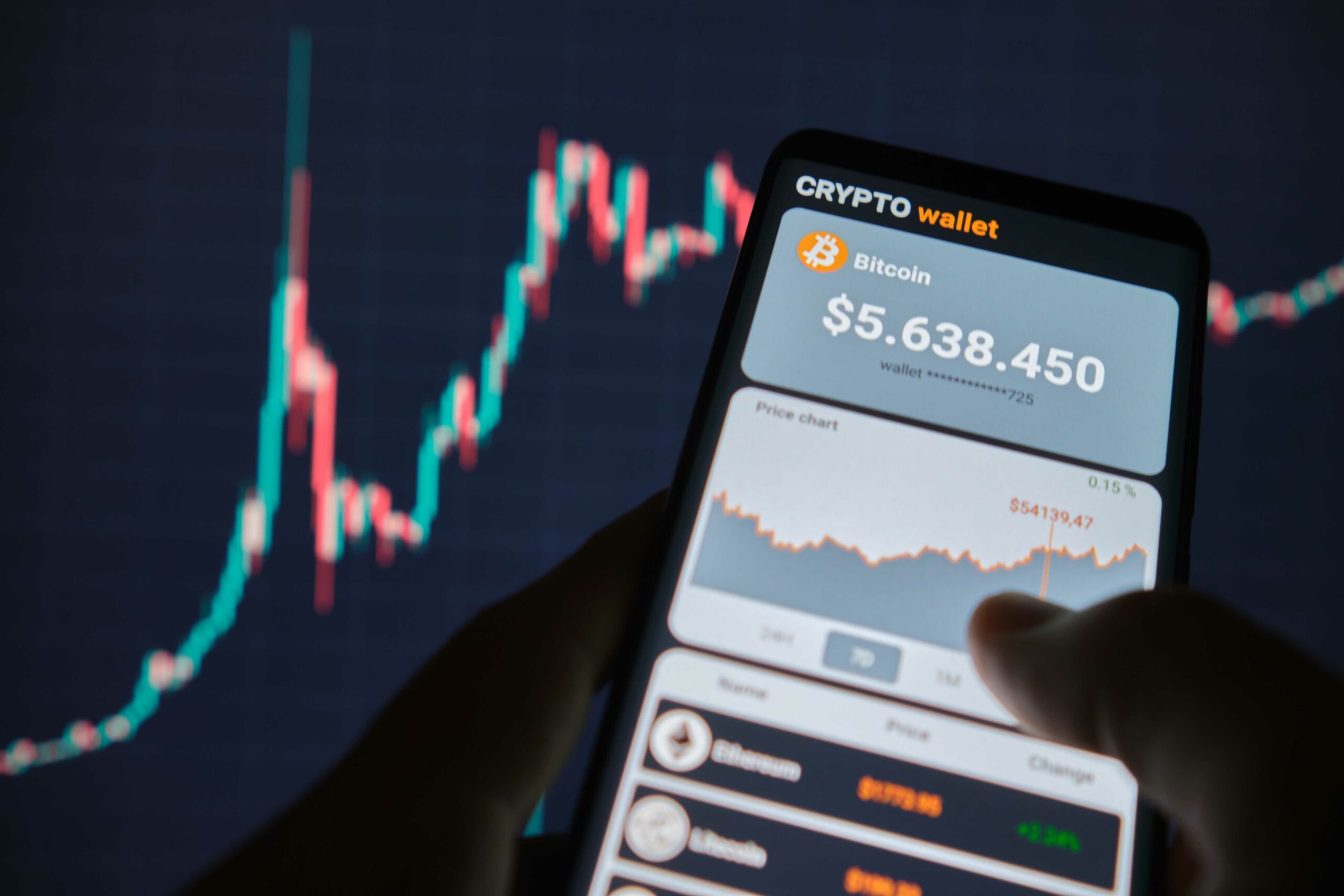 Like traditional stock markets, the buying and selling of cryptocurrencies are facilitated by crypto exchanges. Broadly, there are two types of exchanges: Centralized (CEX) ones that use market makers, like Binance, Wealthsimple, Coinbase, BitFinex and decentralized (DEX) ones that don’t use an intermediary and instead use liquidity pools to establish a peer-to-peer exchange, like Uniswap, PancakeSwap, dYdX, Curve Finance and more.

On such exchanges, each user has a private wallet that is used to store, send, or receive cryptocurrency, the same way you would with PayPal for example.