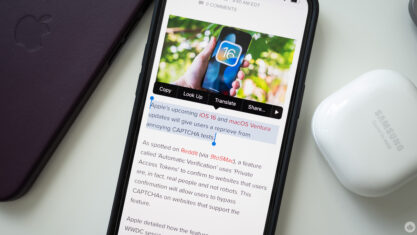 One of the most perplexing things about the original iPhone was the fact that despite all of its forward-thinking, high-tech features, it didn’t support ‘copy and paste.’

On his Twitter account, former Apple engineer Ken Kocienda recently revealed why the OG iPhone didn’t offer the very basic functionality, and the reason is far simpler than many likely assumed.

According to Kocienda, there just wasn’t time to implement the feature.

He says that the team was already working on the iPhone’s virtual keyboard and, for the era, its very unique autocorrect system. Following the smartphone’s launch, Kocienda and his team were finally able to start working on cut and paste. This is when he came up with the idea for the now-familiar “magnifying text loupe” that lets users know precisely where their text cursor is located in order to make copy and paste feel more seamless and natural.

The original iPhone didn’t have cut/copy/paste. Infamous! The quickest explanation is that I didn’t have time to do it right. I had too much keyboard, autocorrection, and text system work to do. The design team didn’t have time either. So we passed on the feature for 1.0. https://t.co/SLncIxohkk

Kocienda goes on to say that even with the virtual magnifying glass, the iPhone’s cursor still moved between characters after the user lifted their finger from the iPhone’s display. He then created a “touch history” log designed solely for text editing to ensure that when you removed your finger from the display, the screen still detected the user’s finger just milliseconds after their last touch.

Copy and paste was first added alongside iPhone OS 3.0 back in 2009. The feature then came pre-installed on all iPhone 3GS devices. The iPhone 3GS first launched with Rogers back in 2008.