Inscryption, Sea of Stars and other indies coming to PS5 and PS4 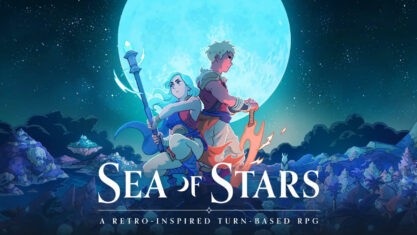 Inscryption is a creepy roguelike deck-building game developed by Vancouver-based Daniel Mullins Games and published by Devolver Digital. The title was originally released on PC.  Sony says that the game will now have PlayStation-exclusive features and is coming to PS5 and PS4.

The game is described as part deck-building roguelike but also part escape-room puzzler and part psychological horror, which is a pretty interesting mixture.

You can learn more about Inscryption, here.

The next is another Canadian game, Sea of Stars, from Quebec’s Sabotage Studio.

This is a retro-inspired turn-based role-playing game with seamless transitions from navigation to combat, no random encounters, no grinding and very interesting combat. This “actual turn-based” fighting has no time bars to reduce pressure when making decisions. It also features timed hits, combo moves, the ability to boost your characters, swapping characters without any penalties and more.

You can learn more about the retro-inspired RPG, here.

That’s it for the Canadian games, but we also got more information about Cult of the Lamb. The title, coming out on August 11th, has players fighting through hordes of monsters and false prophets in order to find new followers and resources to bring back to their cult.

The game has players finding followers, customizing them, building new structures, and performing sermons. In order to run a great cult, you need to have your followers healthy and keep their faith high. Build homes, grow crops, cook meals and more.

You can learn more about this cute game, here.

Signalis is a survival game with psychological and cosmic horror elements.

The game is set in a retrotech sci-fi world with concrete walls, CRT screens and a totalitarian regime. It’s underlined by a Cold War-inspired setting, and fans of cassette futurism will like handling floppy disks, self-developing photos, and old fashion operating systems.

Signalis is launching on PS4 on October 27th.

The Tomorrow Children: Phoenix Edition is launching in North America on September 7th.

“The Tomorrow Children: Phoenix Edition takes place in an alternate future following a failed experiment to unite the minds of all humanity.” Now, humanity’s hope is in the hands of ‘Projection Clones’ that are capable of going into the Void in search of preserved human survivors.

You can learn more about The Tomorrow Children: Phoenix Edition, here.

Schim, is a game where you play as a shadow creature trying to get back to their person. You’ll travel through Dutch-inspired locations, but only through other shadows. You’ll also meet other shadow creatures and characters that you can interact with.

Schim doesn’t have an exact release date but it’s coming out next year. You can learn more about Schim, here.

You’ll be playing as a would-be golf champion who dies just as he’s about to win a tournament and get sent to Golf Purgatory.

You can learn more about Cursed to Golf, here.