Along with a number of other updates coming in iOS 16, including a revamped lock screen, Apple is rolling out a series of updates to its built-in Mail app. Most notably, it will now allow users to schedule emails to be sent ahead of time, and users will be given a moment to cancel the delivery of an email message before it reaches the recipient in the case they spot that a last-minute change is required or they realize they forgot the attachment.

These features and others rolling out with iOS 16’s Mail app will help to make Apple’s native email app more competitive with rivals like Gmail which have offered these key features for some time.

In addition, Apple will allow users to set reminders and follow-ups for their inbox messages. Instead of simply starring messages to make a list of emails that contain to-do items, Mail app users will be able to use a feature called “Remind Later” to have messages resurfaced at a later time of their choosing. Another feature, Follow Up, will automatically remind users to follow up on emails where they haven’t received a response. These two features are also similar to those offered by a number of other email apps. 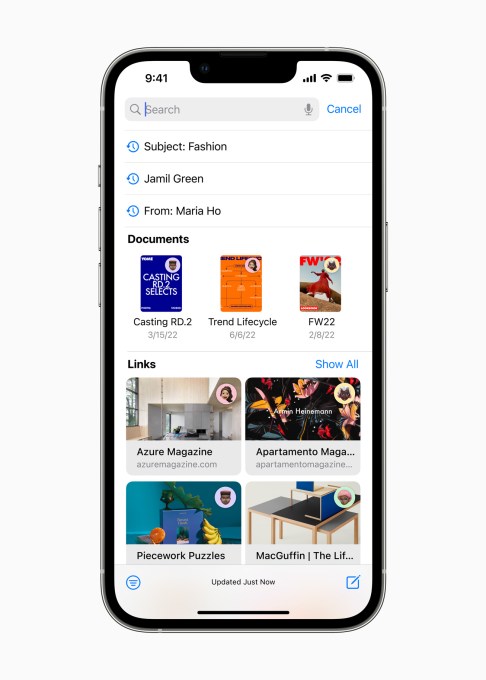 Under the hood, Apple says Mail’s search has been given a big overhaul that will see it delivering more relevant, accurate, and complete results. Users will also be able to see recent emails, contacts, documents, and links as they begin to type into the search field.  Here, they’ll see recent searches and other relevant information in a more visual format with colorful links with previews, document thumbnails, and more. The feature recalls the Siri-powered Spotlight search features elsewhere on iOS devices.

The update to Mail was one of a number of improvements coming iOS 16, alongside updates to other first-party apps like Messages, Health, the Camera, Photos, Wallet, Maps and more.