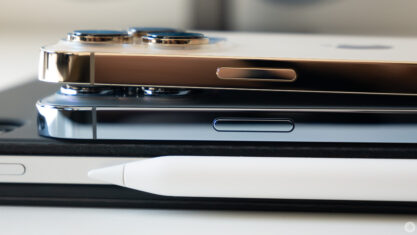 Bloomberg’s Mark Gurman is back at it again.

In his latest report, the often-reliable reporter outlines what he describes as the “deluge” of Apple products set to arrive this fall, including four iPhone 14 devices, new iPad Pros, three Apple Watches, several M2 Macs, new AirPods Pro and possibly even a more powerful Apple TV and a new HomePod.

While most of these devices are rumoured to arrive this fall, it’s unlikely Apple will show them all off at the same event. Similar to years past, the tech giant will probably hold several hardware keynotes over the next few months.

With that out of the way, let’s get into it:

On the iPhone 14 side, Gurman says that only the iPhone 14 Pro and Pro Max will feature Apple’s new A16 chip and an always-on display. Other new iPhone 14 Pro features include a 48-megapixel camera sensor and a pill-shaped Face ID camera cutout, backing up previous rumours. On the other hand, the iPhone 14 is expected to feature an A15 chip — the same processor included in the iPhone 13 — and a new 6.7-inch version that will replace the Mini.

New 11-inch and 12.9-inch iPad Pro models that feature Apple’s M2 chip are also on the way. Looking to the future, 14-inch and 15-inch iPad models coming at some point in the “next year or two,” and even a new entry-level iPad with Apple’s A14 chip and USB-C could drop soon.

Gurman says that Apple’s often-rumoured rugged Apple Watch will launch alongside the Series 8 and a refreshed SE this fall. Similar to past rumours, the watch will reportedly be geared towards “extreme sports.” Apple is sticking with the same performance level as its S7/S6 chip for the Series 8’s rumoured S8 chip.

A new Apple TV that features the company’s A14 chip and extra RAM could arrive this fall, says Gurman. Apple’s AirPods Pro could also receive an upgrade that offers a faster chip and improved sound this year.

And last but not least, a new HomePod is on the way, but it likely won’t appear this fall. Gurman says the new smart speaker features the same size and audio quality as its predecessor but has a new display, multi-touch functionality and a more powerful S8 chip.

Source: Bloomberg Via: The Verge