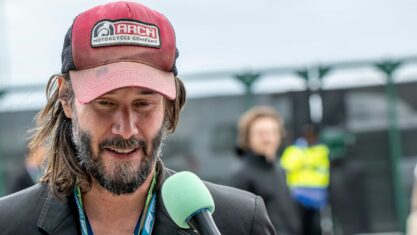 British Formula One managing director Ross Brawn bought the Honda team back in 2009, went on to rename it Brawn GP, and the team went on to win two championships.

Now, Disney+ is working on a documentary about F1 and Brawn, with everyone’s favourite senior citizen and the most humble guy in Hollywood, Canadian Keanu Reeves as the host.

According to the report, Reeves has already started conducting interviews for the role, with former Ferrari chairman Luca di Montezemolo, drivers Jenson Button and Rubens Barrichello seemingly on board. Further, Brawn himself is also reportedly “set to take part.”

Birmingham, England-based North One Television is reportedly producing the documentary, with an estimated release date for Fall 2023.

“We want to tell that amazing remarkable story ,” said Reeves while talking to a journalist at the British Grand Prix in Silverstone, U.K. . “There is so much to talk about. The world of Formula One was just extraordinary. I mean, it’s always extraordinary, but in that year with Brawn GP I think something really special happened.”

Reeves himself is a high-speed fanatic and owns several motorcycles. The Toronto-raised actor also owns a high-end custom American motorcycle company that he founded alongside Gard Hollinger.

A thread; of Keanu Reeves in a motorcycle pic.twitter.com/bbAy7o1IaG