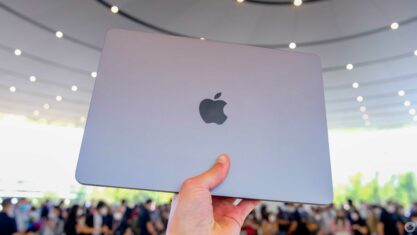 At first glance, the new Air looks like a slimmer 14-inch MacBook Pro, but with more colours, including, Starlight, Space Gray, Silver and a new dark blue hue called Midnight. The new Air also has the display notch and MagSafe connectors for charging. But this story isn’t about what’s the same as the other Apple computers. It’s about what’s new.

M2 is a solid step forwards 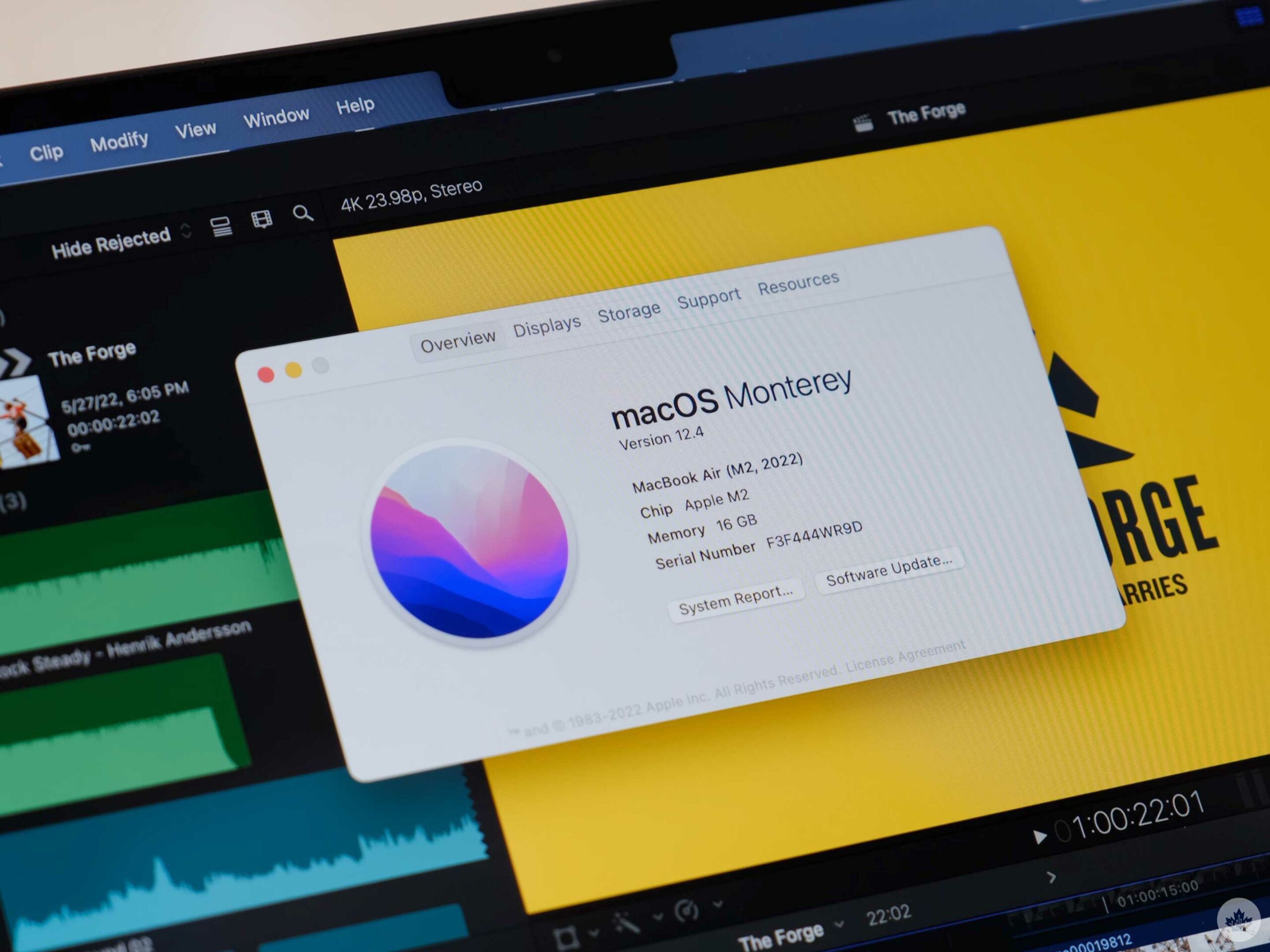 While the new look of the Air is exciting, users are going to get a lot more value out of its increased performance due to the M2 chipset. The chip’s CPU is roughly 18 percent faster than the M1. The Neural Engine is 40 percent faster, but most importantly, there are two more GPU cores which improve graphics performance by 35 percent.

Overall, this should make this new Air a much more capable content creation machine than its predecessor and even allow for some decently intensive gaming. Having said that, the lack of a fan may limit the amount of work/playtime that you get at peak performance since the chip may throttle itself when it reaches its maximum temperatures. If you don’t do a lot of intense work or gaming, the lack of a fan will be a massive plus for you since the computer will be silent and compact. 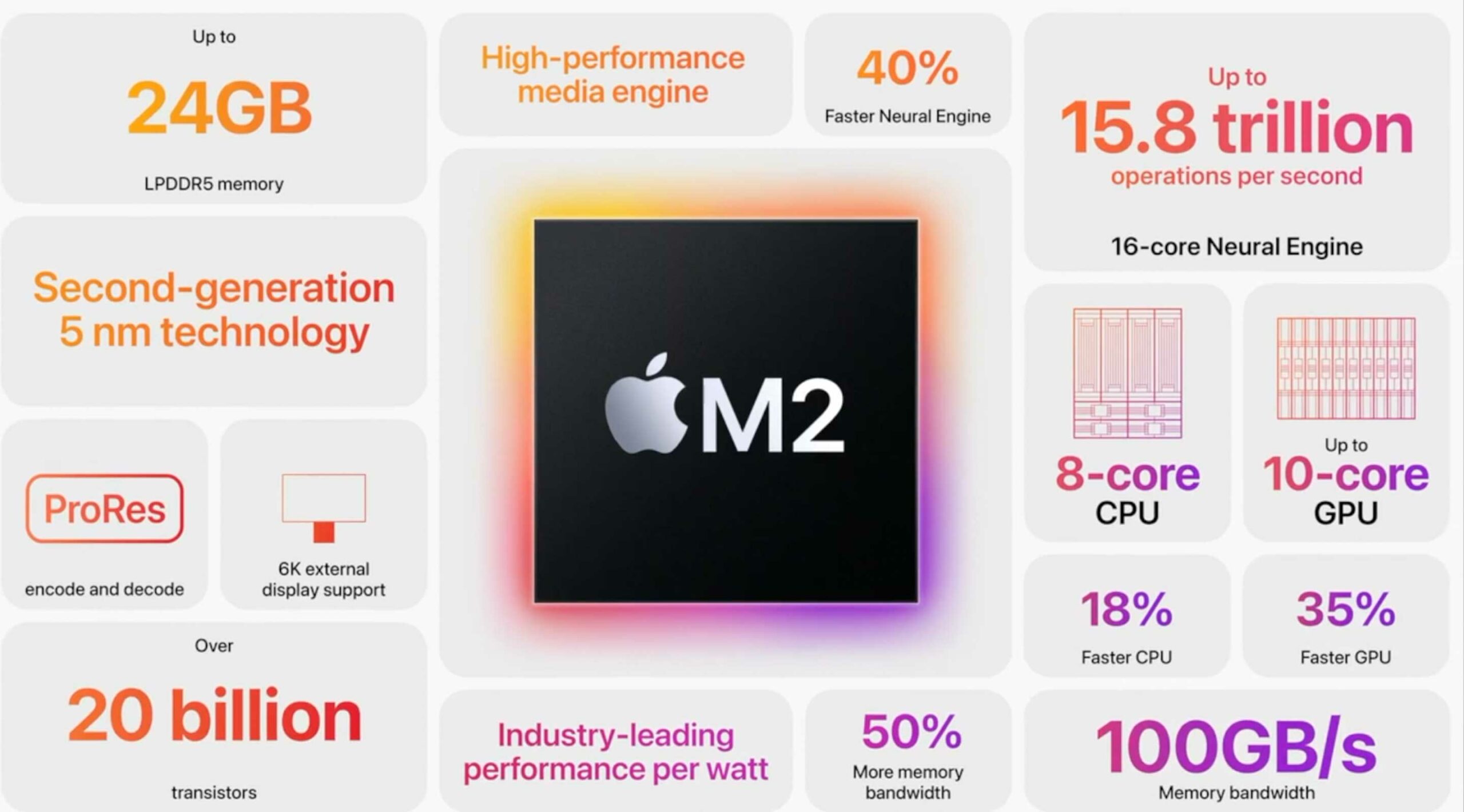 RAM also works faster on the new chip since it supports 50 percent more memory bandwidth (100GB/s) than the first M1 chip. The new chip can also be maxed out with 24GB of RAM, which is a little more than the maximum of 16GB you can add to the M1 Macbook Air.

I couldn’t truly test out the new chip in the Apple hands-on area, but the computers felt incredibly zippy when I was bouncing around them at the event. Since the M1 series of chips have performed so admirably, I’d expect this to be an excellent computer, but wait until our full review to see how it compares to the M1 family of chips.

Meet me under the Midnight Macbook 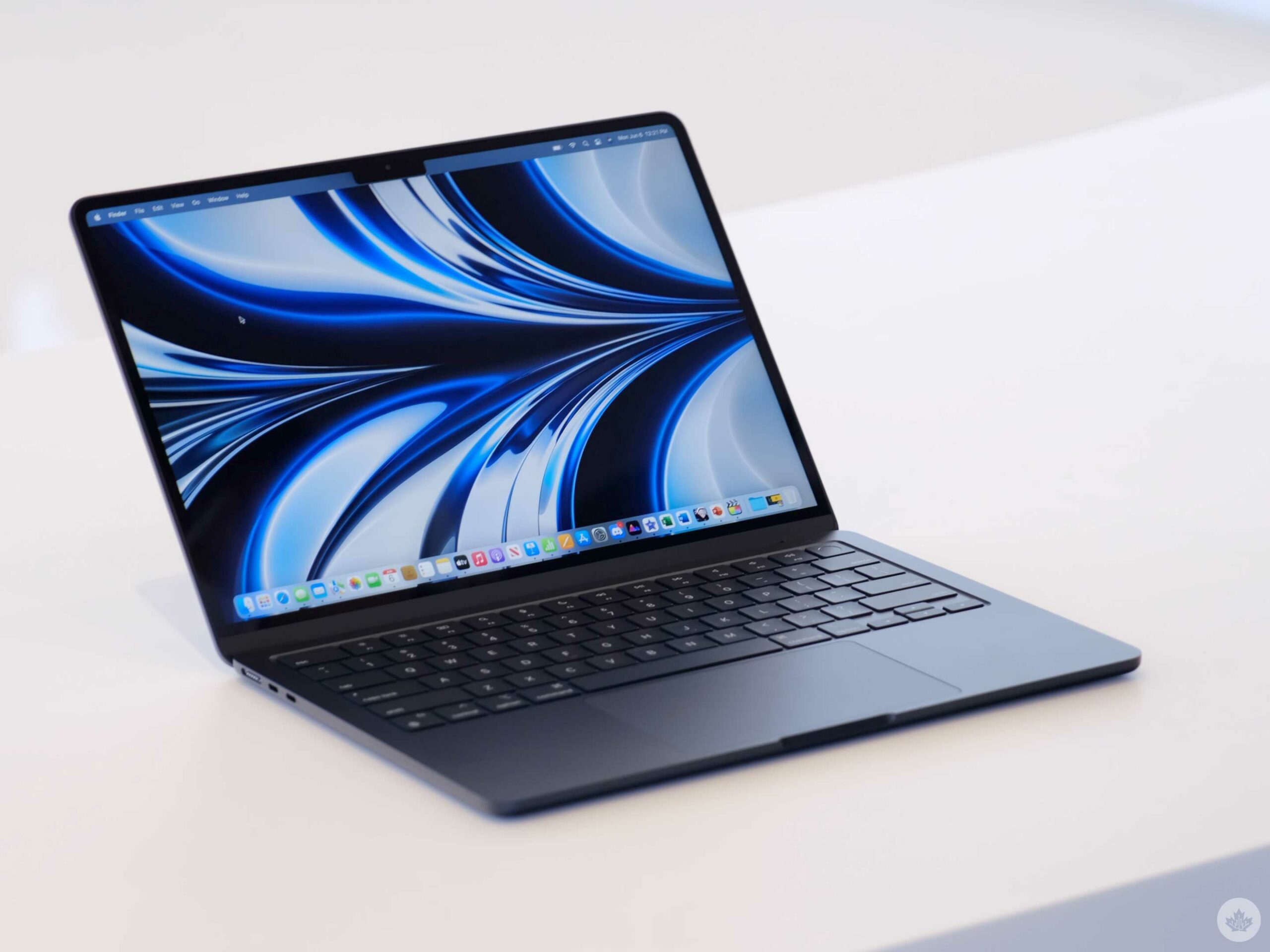 The new design of the MacBook Air looks great, and it feels incredibly thin and light in hand. I haven’t held an M1 MacBook Air since I compared one to the iPad Air, but the soft rounded edges on the new machine felt infinitely more comfortable when grasping the computer.

It also might not be a wedge anymore, but the new design is a constant 0.44-inches thin, which is much thinner than the older Air which is 0.63-inches at its thickest point. However, the tiny feet on the M2 Air will make it feel slightly thicker on a table, but they should also allow for better passive cooling of the machine, which is a nice plus. The new Air is 2.7 pounds, which only puts it at 0.1 pounds lighter than the older model. 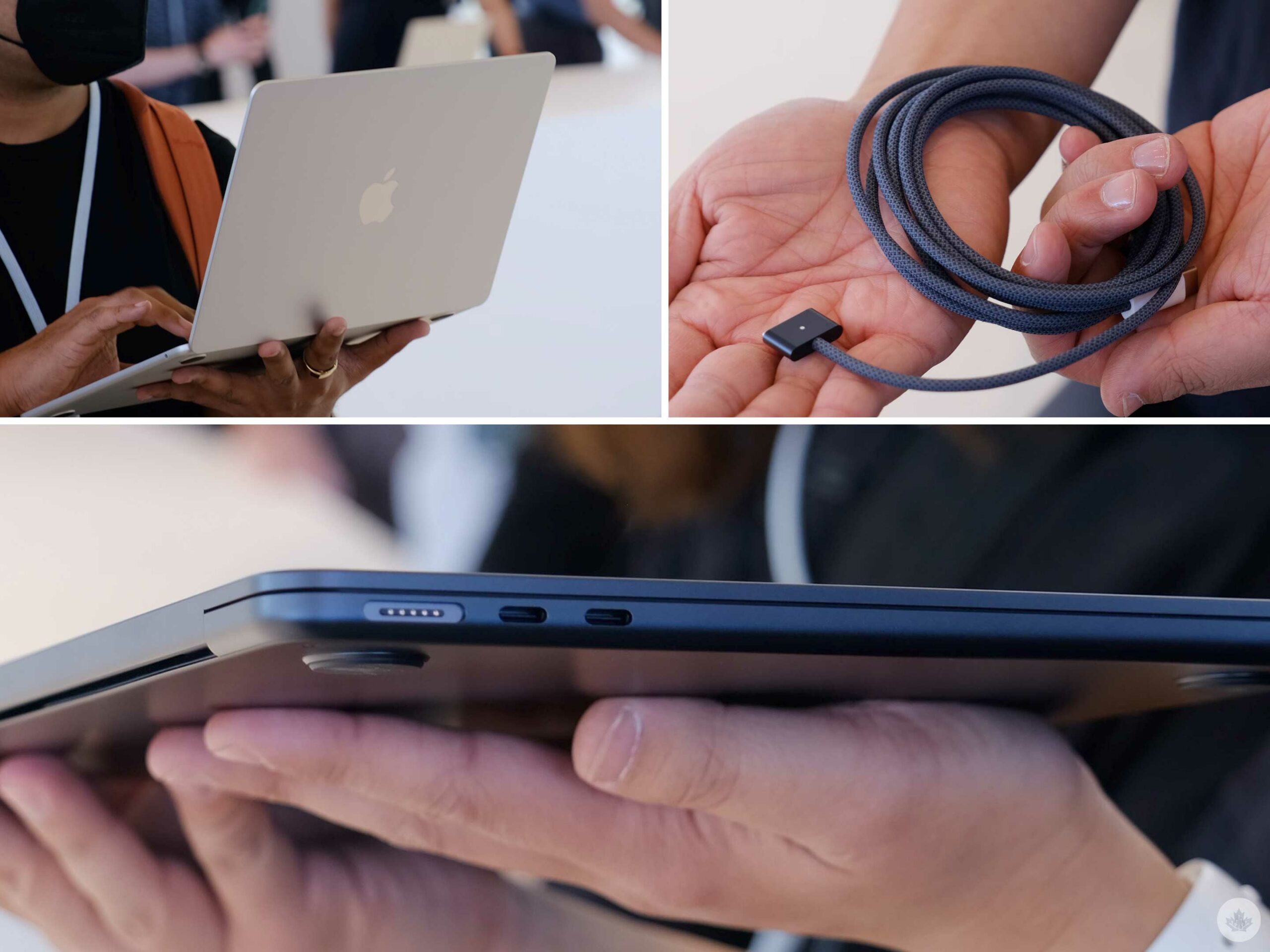 The MagSafe and two USB-C Thunderbolt/USB 4 ports are on the laptop’s left side, and the high-impedance headphone jack is on the right. I was really hoping for the return of the SD card slot or another USB-C port on the left, but at least you can charge this Air and still use two accessories without a dongle.

It’s also worth mentioning that the new MagSafe cable is colour matched to the computer, so the new Midnight blue colour comes with a dark blue cable. The new MacBook Air can even fast charge through this port, but you’ll need to make sure you get the right charging brick. 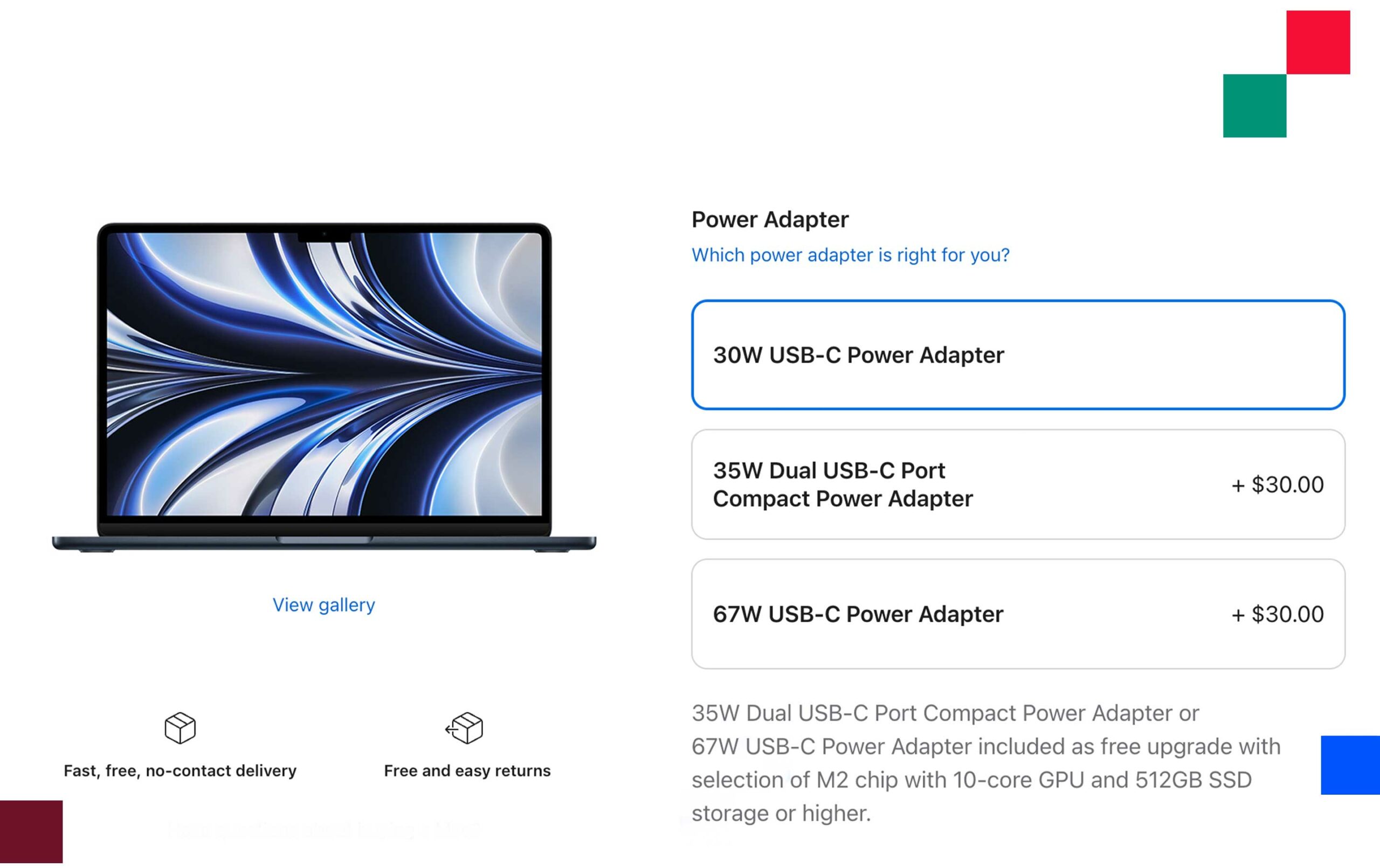 The basic 8-core GPU Air ($1,499 CAD) comes with a 30-watt charger. For an extra $30, you can either add a 67-watt fast charger or the new 35-watt brick with two USB-C ports to charge two devices at once. The more expensive MacBook Air ($1,899) with the 10-core GPU can be outfitted with either high-end charger during checkout online.

Like the 14-inch Macbook Pro, the new Air also has a full-height function row on the scissor-switch keyboard and a Touch ID fingerprint sensor. 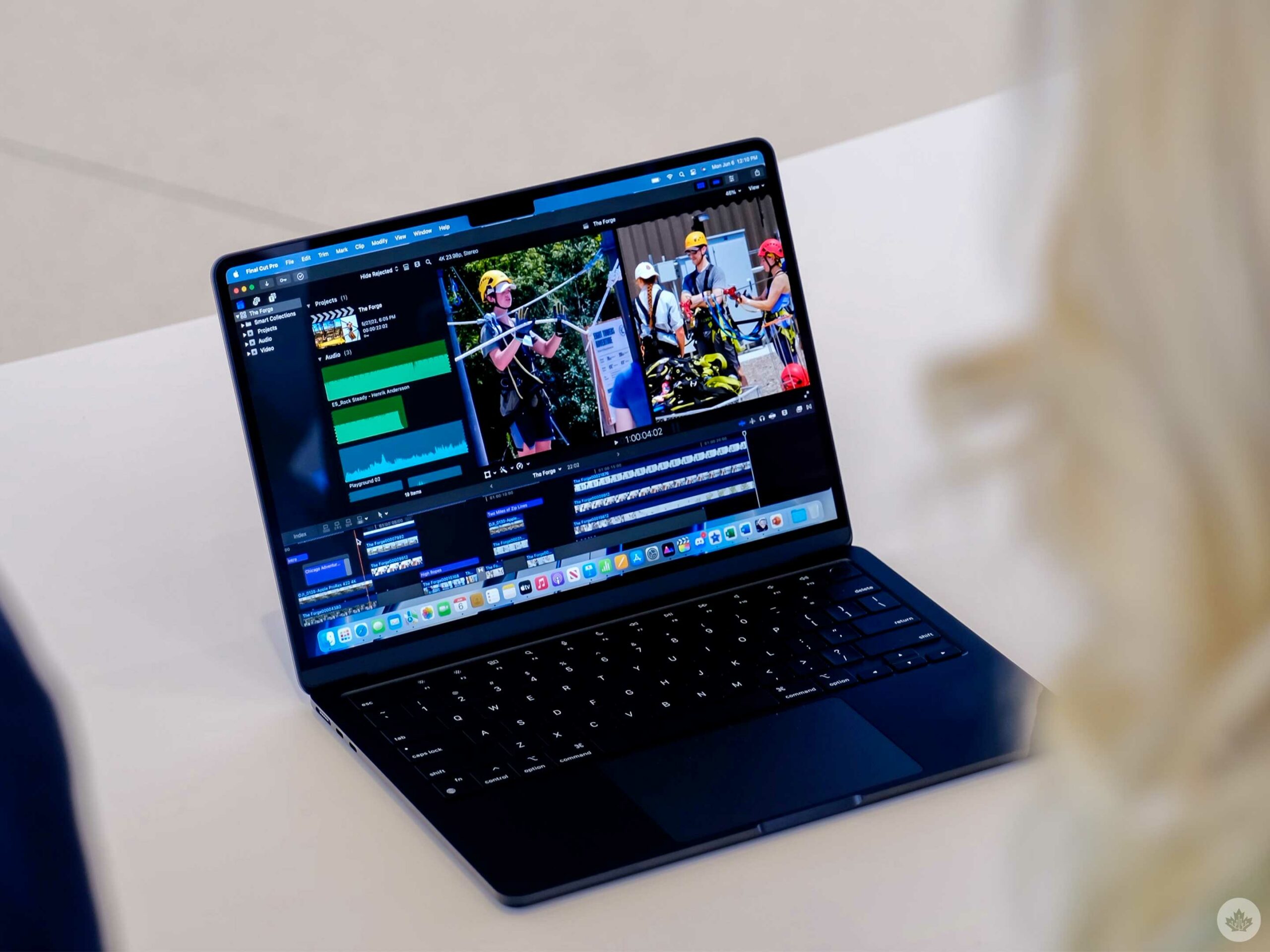 Packed under the keyboard is a four-speaker sound system that punched above its weight class, but it was hard to gauge in the noisy hands-on room. Apple says that it supports Dolby Atmos when you’re playing supported content. There are also three microphones and a 1080p webcam to help with video calls.

You are still limited to a single external display on this new MacBook Air. It can support a 6K monitor, but anyone with two screens will need to jump up to the 14-inch MacBook Pro or find some kind of dongle or workaround.

Finally, Apple retooled the Retina Display on the new MacBook Air, and it now has a peak brightness of 500-nits, P3 wide colour, and it’s larger at 13.6-inches.

Will this be the new computer for you? 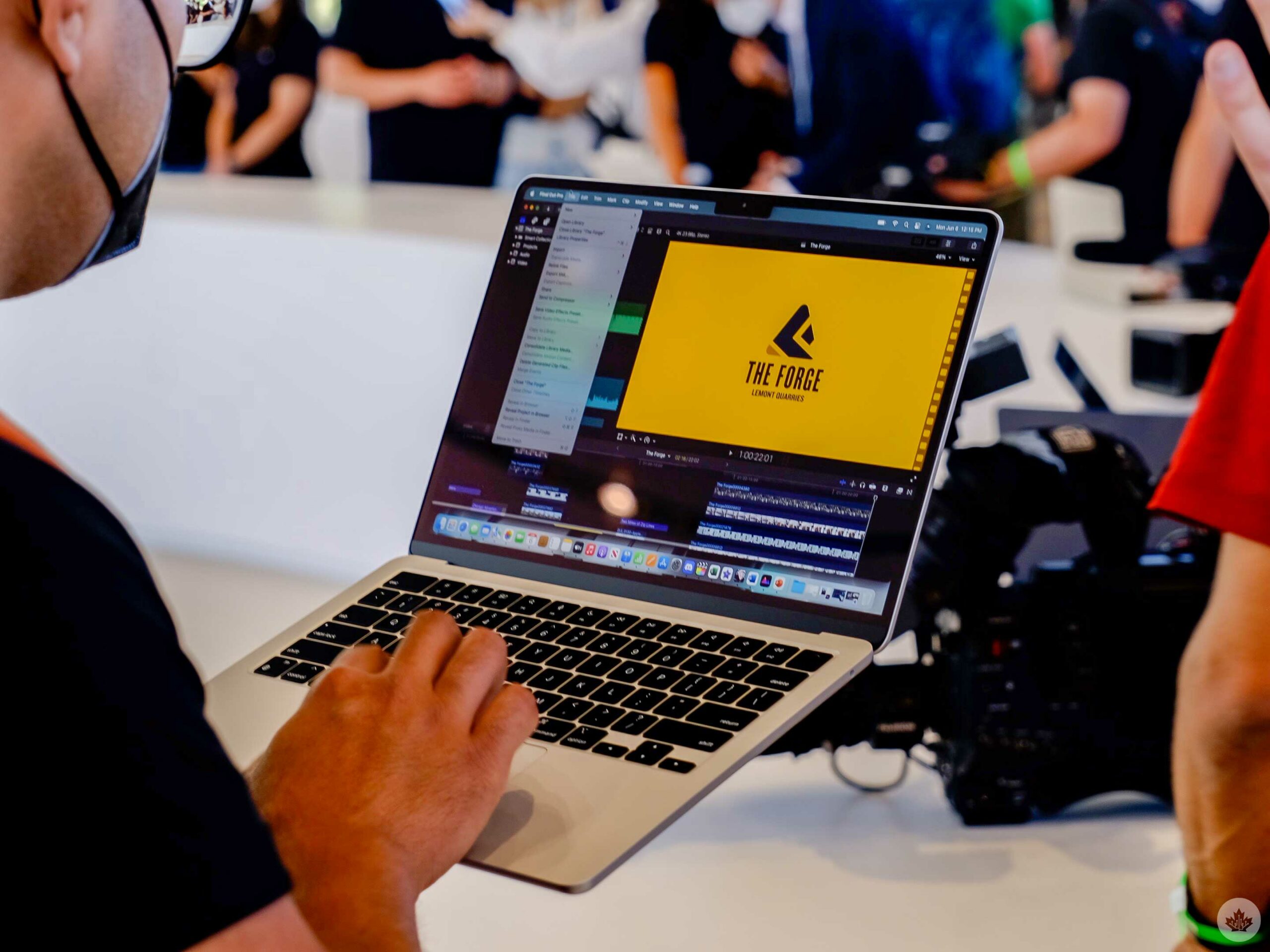 Overall the new MacBook Air is likely a dream computer for many people. It looks great, it’s light, and a ton of performance is packed under the hood.

However, Apple is still intent on selling the 13-inch MacBook Pro (now with an M2 chip) and the older M1 MacBook Air, which is still a great computer. I’m attracted to the new Air ($1,499) since it’s new and looks the best of the three, but if you want to save $200, the base-level Air ($1,299) is still a fine laptop. If you do a ton of high-performance work, then perhaps the M2 13-inch MacBook Pro ($1,699) is the better option, but it doesn’t seem like a machine that should cost more than the new Air to include fans and a slightly larger battery.

This messy medium-tier laptop sales strategy may allow Apple to hit more price points and ideally bring in new customers, but with the minimal differences between the two Airs and the MacBook Pro 13-inch, I think consumers are likely going to be confused, and it would be nice to see Apple attempt to build a machine that’s the best of all three.

All that being said, at the end of the day, the new Air is a stellar computer, and anyone looking for the sexiest/lightest MacBook won’t have to look any further.