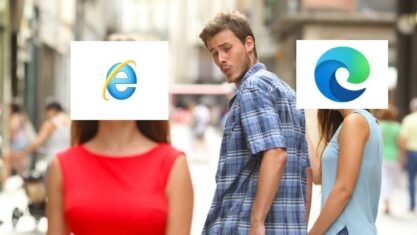 Back in May 2021, Microsoft revealed that it would soon discontinue Internet Explorer 11 on desktop, and that day has finally come. Today marks the day Microsoft ends support for Explorer.

Now, the tech giant has started softly nudging users to switch over to its Edge browser.

Opening Explorer now shows a huge pop-up front and center that recommends that you switch over to Microsoft Edge. “Is your browser living up to your PC’s full potential? Microsoft Edge has new features built to bring you the best of the web,” reads the top-positioned popup as seen in the screenshot below:

The prompts are the first step Microsoft is taking to phase the old browser out, whereas future updates would completely disable Explorer.

“Eventually, Internet Explorer will be disabled permanently as part of a future Windows Update, at which point the Internet Explorer icons on users’ devices will be removed,” said Sean Lyndersay, general manager, Microsoft Edge Enterprise, in a blog post about phasing out the old browser.

As part of the redirection procedure, user data, including favourites, passwords and settings would automatically be imported from Internet Explorer to Edge, with an option to get rid of the data in Edge’s setting menu.

“Certain versions of Windows currently in support and used in critical environments, we will continue to support Internet Explorer on those versions until they go out of support,” clarified Lyndersay. “These include all currently in-support Windows 10 LTSC releases (including IoT) and all Windows Server versions, as well as Windows 10 China Government Edition, Windows 8.1, and Windows 7 with Extended Security Updates (ESUs). Future versions of these editions will not include Internet Explorer.”

Learn more about the transition from Explorer to Edge here.