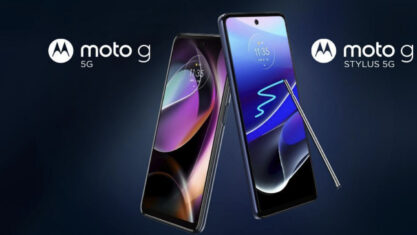 The Moto G Stylus features a Qualcomm Snapdragon 695 5G processor, 4GB, 6GB or 8GB of RAM, and 28GB or 256GB of built-in storage that’s expandable via a microSD card.

Additionally, the phone features a 6.8-inch FHD+ display with a 120Hz refresh rate and a 5,000mAh battery.

The primary shooter features a 50-megapixel sensor with an f/1.9 aperture, an 8-megapixel ultra-wide angle/macro vision lens, and a 2-megapixel depth shooter.

On the front, there’s a 16-megapixel selfie camera. It also offers Dolby Atmos speakers and comes with Android 12 pre-installed.

Motorola has confirmed to MobileSyrup that the Moto G 5G and Moto G Stylus 5G are both coming to Canada but that a release date and pricing has not yet been revealed.