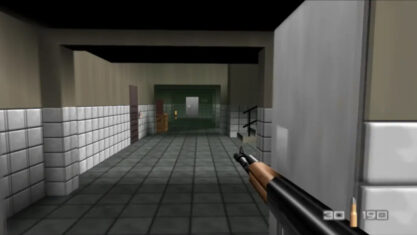 Before Halo: Combat Evolved on the original Xbox, Goldeneye 007 for the Nintendo 64 was the premier console first-person shooter (FPS).

Though the game is famous for its proximity mine and RCP90-filled multiplayer mode (remember what a good map ‘Library’ was?), it was difficult to get through a split-screen match without accusing your friend or family member of “screen peeking.”

4 screen GoldenEye on the original N64 hardware! No screencheating here! …but how?
Come and experience this at our GoldenEye evening, celebrating 25 years of GoldenEye for Nintendo 64: https://t.co/F918hEQ20v pic.twitter.com/05jA82upb8

A quick glance at your opponent’s half of the display stacked directly beside your own was often the difference between winning a heated gunfight (I’ll admit that I did this all the time as a kid).

However, the Centre of Computing History has found a way to give every player their own screen in the N64 FPS classic. In a video shared on Twitter (seen above), the organization shared how it got this project up and running for its upcoming 25 years of GoldenEye Dev Talk Evening event. Those attending the event will also be able to test out the experience for themselves.

It’s worth pointing out that this OG Xbox System Link-like setup won’t be accessible to the average player. According to the Centre of Computing History, it cost roughly £8,000 (roughly $12,735) to put together.

That said, it’s running the original cartridge version of GoldenEye 007 and not an emulator so, of course, that high cost is worth it.