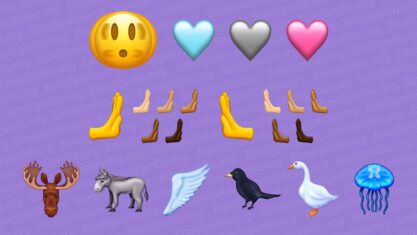 Ahead of World Emoji Day (July 17th), Emojipedia revealed a glimpse of what new emoji could arrive on smartphones later this year.

According to the Emojipedia draft list and sample images, ‘Emoji 15.0’ features 31 new emojis from the Unicode Consortium. The emojis are submitted in a draft list and, once approved, are expected to release sometime in 2022 and 2023.

Notable contenders expected to make the cut are the ‘shaking face emoji,’ ‘high five emoji’ and the ‘wireless emoji.’

The ‘high five emoji’ could be quite useful given the ‘praying hands emoji’ is often currently used to represent a high five.

Other notable emojis include new mammals, birds, fish, instruments and more. To be more specific, jellyfish, moose face, donkey, blackbird, goose, a wing, hyacinth, ginger, pea pods, maracas and flutes are just some of the other emoji candidates included in the draft list.

Sources: Emojipedia Via: The Verge