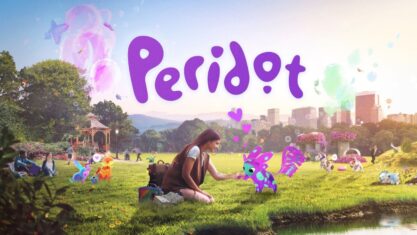 Niantic has revealed its next mobile game, Peridot. The augmented reality (AR) title will soon enter a soft-launch phase on iOS and Android.

Revealed via a quick teaser, Niantic showed off a few of the creatures found in Peridot. Many of them share similarities to Pokémon, and the game itself looks very much like what we’ve come to expect from Niantic.

Players collect creatures and raise them as their own. These creatures as referred to as Peridots and offer their own individual personality traits. Players must identify their likes and dislikes before breeding them with other Peridots. This then creates new generations of creatures to interact with.

In some ways, Pokémon Go’s DNA is very apparent here. However, there doesn’t seem to be an emphasis on catching Peridots. Instead, gameplay traits from Tamogatchi or Pikmin seem to be more present in the title. Players must play with their Peridots and feed them. The creatures are also able to learn new tricks along the way.

As Peridots are captured, each one is catalogued in the game. Once different species are bred, those new archetypes are discovered and shared in the game’s catalogue of creatures.

As an AR game, players can use their iOS and Android devices to bring their Peridots with them on the go. You’ll be able to take pictures and videos of the creatures in the real world using the game’s AR capabilities.

As for how the game’s UI looks and how players capture Peridots, those questions remain unanswered. Given Niantic’s previous work, it’s safe to assume that it will offer a streamlined gameplay loop. Peridot looks to be a title geared towards players of all ages, and its gameplay will likely reflect that.

Niantic has opened up pre-registration to players. Those who want to stay up to date on the Peridot development and release can find out more on Niantic’s website. website.

The studio says that Peridot’s soft launch will be limited to specific markets, but didn’t reveal launch regions.