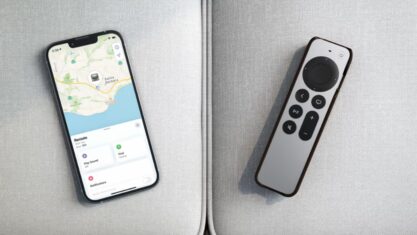 Nomad is releasing a Leather Cover for the 2021 Siri Remote. This cover includes a pocket designed for an AirTag, adding the ability for users to track the rather small remote.

In 2021, Apple launched the new Siri Remote for Apple TV. The new remote includes a revamped design but as many have pointed out, it lacks a U1 chip.

Nomad’s case for the 2021 Siri Remote effectively enables users to track the device in the event it’s lost in another room or is misplaced in the couch cushions. However, it does rely on the use of an AirTag and the Find My app. The official Nomad Leather Cover description reads:

“Leather Cover elevates the look and feel of your Siri Remote. Constructed with a hidden inner pocket for your AirTag, Leather Cover allows you to easily track your Remote using the Find My App.“

Nomad’s Leather Cover for Siri Remote is made of Horween leather, sourced from the U.S. It features a microfibre interior lining and a hidden AirTag Pocket. This allows for the discreet use of an AirTag.

Currently, the cover is available in an Ashland Brown colour. On its website, Nomad lists the Siri Remote cover for $39.95 USD (roughly $50.45 CAD).