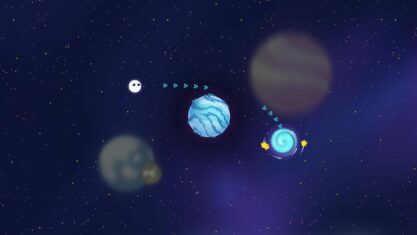 Noodlecake Studios has launched Moonshot – A Journey Home on Apple Arcade. The Canadian studio is known for developing a bevy of games including Nuts.

Morsel Interactive, a small, two-person team consisting of Milan Cubic and Valentina Bregovic, developed the title after launching the Vibe Camera photo app on iOS. Moonshot is described as a mini-golf game in space.

The game features a physics-based slingshot mechanic where players fire Moon Pi, a young moon, across a wide universe. Additionally, Moonshot – A Journey Home features a story in which Moon Pi hopes to return to Mother Earth.

“Players will launch themselves past other planets’ gravity fields, all while avoiding dangerous traps like black holes, aliens and other strange space phenomena in their quest back to Mother Earth,” the game’s description reads.

Finally, on top of launching Moonshot – A Journey Home, new content updates on Apple Arcade include:

As Moonshot – A Journey Home is an Apple Arcade Original, the game is playable on iPhone, iPad, Mac, and Apple TV. Apple Arcade is available for $5.99/month.

New PlayStation Plus slated for June 13 release in North America