Our Flag Means Death has been renewed for season 2 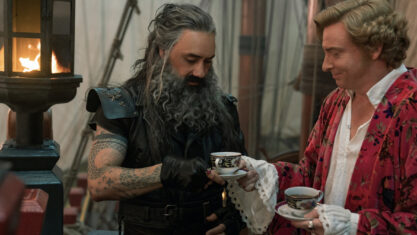 HBO Max has announced Our Flag Means Death will come back for a second season.

This announcement comes three months after the show finished airing its first season back in March and in time for Pride month.

Our Flag Means Death stars Rhys Darby and Taika Waititi as pirates, with Waititi, is playing Ed Teach, aka Blackbeard, and Darby will be coming back as Stede Bonnet. In the series, Bonnet tried learning to be a proper pirate from Teach and, in return, taught Teach how to be a real gentleman. During this process, the two fall in love but unfortunately end up breaking apart.

According to The Verge, the series creator David Jenkins teased that Our Flag Means Death’s next season will explore the emotional experience of Stede and Blackbeard after their falling out. And explore the heartbreak of the two main characters.

“The pirate stuff is there, but it’s about those things,” Jenkins said to The Verge. “If you can follow the beats of having your heart shattered and trying to recover from it, and having done something that hurt someone you love and trying to repair that, that’s an interesting story.”

Our Flag Means Death season 1 is on Crave, and we expect the second season to also be on the Bell Media streaming app.

Source: HBO Max Via: The Verge