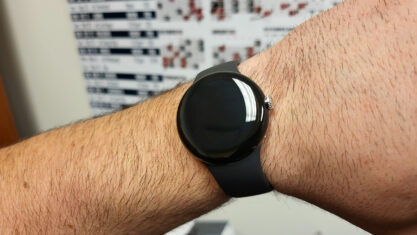 While Google has yet to officially reveal its long-rumoured Pixel Watch, yet another glimpse of the smartwatch in the real world has appeared, this time courtesy of Reddit user Tagtech.’

Tagtech’s post shows off the rumoured Pixel Watch and its 20mm black soft silicone watch band that reportedly doesn’t show fingerprints that badly. Additionally, the Reddit user says that it feels thinner than its measurements indicate and that it’s the “most comfortable” watch they’ve ever worn. Additionally, they describe the wearable as feeling secure on their wrist, but difficult to put on the first time. This is the same Pixel Watch that leaked in several images earlier this week.

You can check out all of the images of the Pixel Watch on Tagtech’s Imgur account.

Earlier this week, Google filed the trademark for “Pixel Watch” with the United States Patent and Trademark Office (USPTO). We’ve checked Canada’s Radio Equipment listing and the Pixel Watch has yet to appear, though it likely will at some point in the near future. Still, this could be an indication that the wearable won’t launch in Canada at the same time as the United States.

At Alphabet’s earnings call on April 26th, the company’s CEO, Sundar Pichai stated that new hardware will be revealed at Google I/O on May 11th. It’s possible this is when the tech giant will finally show off the long-awaited Pixel Watch and Pixel 6a.