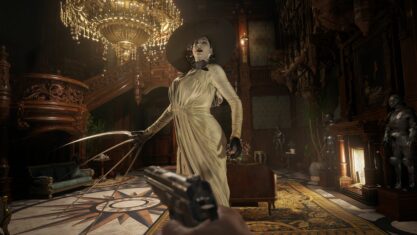 It’s now become easier to test out a demo of Resident Evil Village thanks to Google Stadia. As Capcom has launched a demo for its critically acclaimed entry in the Resident Evil series, it’s powered by Stadia’s cloud innovations.

Google’s vision is to enable players to test out the game prior to purchasing it no matter the device they own. Therefore, while partnering with Capcom, anyone can try the Resident Evil Village demo. The best part is you don’t even have to be a Google Stadia subscriber.

Previously, Stadia users had access to the Resident Evil Village demo. Now, anyone with access to a supported web browser and a relatively stable internet connection can try it. Google consistently claims users should have a 10mbps connection to thoroughly enjoy Stadia. Users must simply navigate to the Capcom website, enter a valid birthday, and hit the play button.

In the Resident Evil Village Online Streaming Demo, players venture two relatively short snippets of the game. You can venture to the village and castle areas, two locales from very early on. The demo supports mouse and keyboard as well as Xbox Wireless Controller and PlayStation’s DualShock 4 or DualSense.

The resolution of the demo tops out at 1080p. Although it does not take away from the experience, it’s certainly a step back from what you’ll experience on a decent PC rig or an Xbox Series X/S and PlayStation 5.

However, Google’s vision for Stadia opens up a new vector of possibilities. If future demos are available similarly to Resident Evil Village, more people can test games prior to purchase. This marks a huge boon for accessibility. Players can test out a game, see its UI, and how it operates to make a decision on a purchase.

In recent news, Apple and Capcom announced that Macs will soon support Resident Evil Village natively. Later this year, MacBook Airs powered by M2 can run the game in 1080p. The Mac Studio, on the other hand, will support up to 4K resolution.