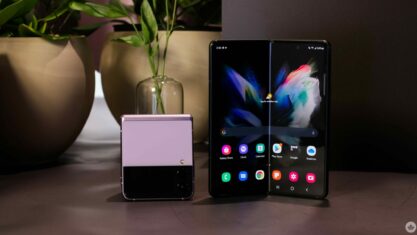 Samsung’s Unpacked event is set for August 10th, 2022, according to a new blurred image of the Galaxy Z Flip 4 foldable from established leaker Evan Blass.

**THIS IMAGE HAS BEEN EDITED TO OBFUSCATE CERTAIN DETAIL**

See what I did there? pic.twitter.com/BrH4sT99yU

Alongside the Z Flip 4, Samsung is also expected to show off the Fold 4, Galaxy Watch 5 and the 5 Pro.

The Fold 4 is expected to feature a 7.6-inch AMOLED 120HZ refresh rate inner display, a 6.2-inch Cover screen with 120Hz refresh rate, Snapdragon 8+ Gen 1 chipset, up to 16GB of RAM and 512GB of storage and a camera setup that boasts a 50-megapixel primary shooter.

The Flip 4  is expected to sport a 6.7-inch 120Hz refresh inner screen, 2.1-inch outer display, Snapdragon 8+ Gen 1 chipset, up to 8GB of RAM and 256GB of storage and a camera setup that features two 12-megapixel sensors.

Additionally, renders of the Galaxy Watch 5 and 5 Pro appeared online, showcasing a similar design to previous models. Except this Pro variant will be replacing the “Classic” version of the watches and will lose its rotating bezel.

Previously, Jon Prosser indicated that the event would happen on August 10th and the phones would release on August 26th.

You can see more renders of what the Flip 4 is expected to look like here.