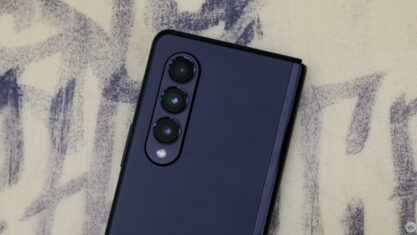 Samsung looks to be planning a significant camera upgrade for its upcoming Galaxy Fold 4, according to the tipster Dohyun Kim.

The phone will sport a 108-megapixel shooter similar to Samsung’s Galaxy S22 Ultra and other Galaxy S20 variants. Another tipster, @chunvn8888, has also corroborated Kim’s leak.

Same setup sensor as the S22U, might lack the periscope sensor

The foldable handset will reportedly sport a 108-megapixel primary shooter, a 10-megapixel telephoto camera and a 12-megapixel ultrawide shooter, but might lack a 10x optical zoom periscope lens. While this camera upgrade is notable, dismissing the 10x optical zoom lens seems like a misstep on Samsung’s part since it’s so useful with the Galaxy S22 Ultra.

Last year’s Fold 3 hosted three 12-megapixel rear cameras, so this would be a significant camera array improvement on Samsung’s part.

Recent rumours have also indicated that the Galaxy Fold 4 will lack a built-in S Pen and that the phone will likely launch sometime in August.