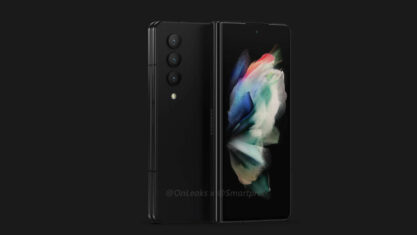 Unofficial renders of the Galaxy Z Fold 4 offer a better picture of what we can expect from the foldable smartphone when it’s likely officially revealed in a few months.

The renders were published by SmartPrix, based on information from the ever-reliable Steve Hemmerstoffer (Onleaks).

The renders show that the phone looks very similar to the Fold 3 from the front, and sports a camera array inspired by the Galaxy S22 that launched earlier this year. This camera setup will contain three lenses that protrude from the rear and an LED flash.

The handset will flaunt a 6.2-inch cover display, and a larger 7.6-inch tablet-like screen when unfolded. The leak indicates that we’ll again see a high refresh rate on the displays and an improved under-display camera.

Despite the increased thickness, Ice Universe says that the Fold 3 is “very light.” And now that the foldable is slightly wider, the Cover display is almost the same width as the iPhone 13 mini.

Theres still no sign of a built-in slot for the S-Pen stylus. Smartprix says there’s also a very small change to the hinge that makes it a bit better.

It’s unclear when Samsung will unveil the Fold 4, but we’re expecting to see it in August or September this year, alongside a couple of other foldable devices.