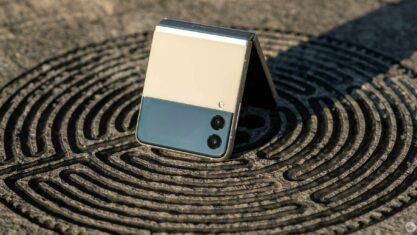 Samsung’s Galaxy Flip 4 might feature an only a slightly bigger battery than its predecessor.

According to a new rumour from the Dutch publication GalaxyClub, the upcoming foldable will feature a pair of batteries with the model numbers ‘EB-BF721ABY’ and ‘EB-BF722ABY.’ According to the leak, the cells will measure in at 2,400mAh and 903mAh, equalling 3,303mAh in total. With this in mind, Samsung will likely advertise the Flip 4’s battery as featuring 3,400mAh (typical) in capacity.

This battery improvement is minimal as the Flip 3 sports a 3,300mAh battery. In my review of the Flip 3, I noted that the phone’s battery doesn’t last all day, citing it as one of the otherwise solid smartphone’s most significant issues.

I find that if I used the device consistently starting at 9am, it only makes it until roughly 7pm. Checking the Flip 3’s Battery settings reveals that I only ever get at most four and a half hours of screen-on time out of the device.

I doubt that the Flip 4 will offer a better battery experience than its predecessor, unless Samsung has new battery life management techniques in the works. The Galaxy Z Flip 4 is expected to launch sometime in August or September.