Spotify today is expanding access to publish video podcasts to all creators across five key markets, including the U.S., alongside the introduction of a range of new tools for podcast creators like support for subscriptions, embeddable videos, analytics, and more. The company first began testing support for video podcast creation through its Anchor platform last fall, but it was only then available to a select group of podcasters.

Today, access is opening up to any creator in the U.S., Canada, New Zealand, Australia, and the U.K. Using the Anchor platform, creators will now be able to upload video content to Spotify just as they already publish audio. Spotify says additional markets will be supported in the future, but didn’t provide a timeframe.

The company is also now rolling out a suite of new tools and features for video podcast creators, including, notably, a way to monetize. Spotify’s existing Podcast Subscriptions product will now be available for video podcasts as well, which allows creators to charge for access as they see fit. They could offer subscribers exclusive video content, or could put all video behind a subscription while keeping the audio version of their show free, for example. Spotify says more monetization options are on the way as well, and that would surely hint toward some sort of advertising model. 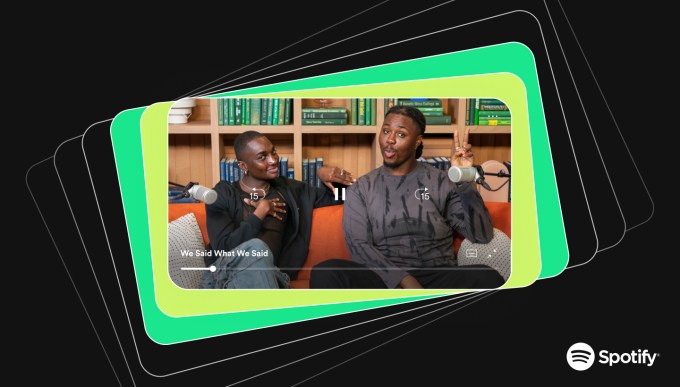 Other interactive features already available to audio podcast creators are now making their way to video with this launch. This includes support for Polls and Q&As, rolled out last fall to creators and users worldwide.

Video podcasts can now also now be embedded off-platform, where the video will play directly in the embed player wherever it’s placed.

For podcasters looking to understand how well their videos are doing, new video analytics will offer insights into that audience. A video bulk-replace feature will make it easier to move to video, as it will allow Anchor creators to replace their existing audio episodes with video versions from a simple interface.

Spotify also announced a new partnership with remote recording platform Riverside, allowing creators to record and publish video content for free with Riverside’s tools, then distribute their video podcast to Spotify via Anchor.

The company has already invested around $1 billion in podcasting between its acquisitions, exclusive deals and other partnerships over the years. Its Joe Rogan deal alone is said to be worth over $200 million. That’s a big bet on the future of audio. But with the addition of video podcasts, Spotify can compete not only in the audio ad market through traditional podcasts, it can compete in video as well. The challenge, however, could be in driving adoption of the format among creators — many of whom chose podcasts for the relative simplicity compared to publishing and editing video for a site like YouTube.

YouTube has taken notice of Spotify’s move into its market. Its podcasts roadmap recently leaked, which included plans to pilot the ability to pull in RSS fees to a dedicated page on YouTube.

How to pitch me: 6 investors discuss what they’re looking for in April 2022