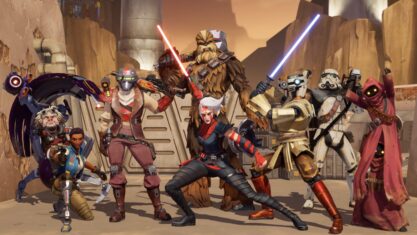 The launch of Star Wars: Hunters is being delayed until 2023. Zynga confirms that in order to meet the studio’s “high expectations,” the title is being pushed from its September 2022 release.

On Twitter, Zynga clarifies that the delay affects the launch of the game across all devices. The studio first announced the game in 2021 and that it would arrive on Nintendo Switch, iOS and Android. “We invite all gamers to join us on Vespaara when Star Wars: Hunters launches in 2023 on Nintendo Switch, iOS, and Android devices,” the studio says.

Star Wars: Hunters is a PVP arena-based shooter set in the Star Wars universe between Return of the Jedi and The Force Awakens. Players build a team of characters across the Star Wars universe. Ranging from bounty hunters to Rebellion heroes and Imperial fighters, players face off in various arenas.

The announcement of a delay comes despite Zynga having soft-launched the game earlier this year. To gauge community feedback and allow hands-on time with Star Wars: Hunters, select regions have been able to play the game via the soft launch.

“We truly appreciate your support and feedback as we work to make Star Wars: Hunters the best it can be,” Zynga says. The studio will continue to roll out content updates for its game until the game is ready for a worldwide launch. A new update is set to arrive within “the next few weeks.”