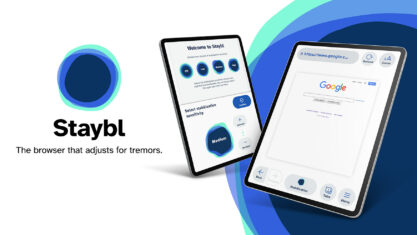 People with Parkinson’s disease, Multiple sclerosis, Dystonia or any other ailment that causes tremors in the body have difficulty using modern gadgets.

As first reported by The Verge, Havas Worldwide has developed an app called Staybl (a play on stable) for the iPad that makes it easier for people with shaky hands to enjoy technology without having to struggle to perform actions like clicking buttons, holding the tablet stable, swiping and more — actions that come naturally for people without said ailments.

Essentially, Staybl is a browser with several accessibility features for those suffering from hand tremors.

According to the app’s description on the App Store, it was tested by people who have Parkinson’s and actively adapted to suit those with hand tremors, allowing people the best possible iPad experience.

The iPad-only app, in conjunction with the iPad’s accelerometer, detects when the device is being shaken due to tremors, and accordingly moves the on-screen page in the opposite direction to maximize page stability. The app also offers users several presets designed for different tremor intensities. “Depending on the selected preset, the browser window will shrink to provide additional free space to compensate for tremor movements,” reads Stabyl’s website.

Additionally, the browser eliminates swipe and slide gestures for navigation, and provides enlarged buttons that are easier to press, along with specific settings to tackle tremor symptoms that change intensity throughout the day.

As of right now, the Staybl app is only available for the iPadOS 14 or later, and the developers recommend that it works best on newer iPads with a 120Hz display. Havas Worldwide has plans to expand the application to both Android and iOS devices in the future, though it doesn’t have a concrete date set.

Learn more about the app here, or download it here.

Source: Staybl Via: The Verge

Actor Kel Mitchell is on a New Faith Filled Mission