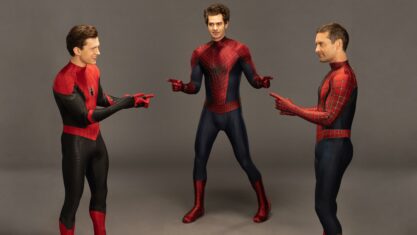 Our ‘Streaming in Canada’ column typically focuses on new content from Amazon Prime Video, Crave and Netflix, but other services like Apple TV+ and Disney+ are mentioned when relevant. Premium video on demand (PVOD) platforms are also fair game as movies continue to come to digital early amid the COVID-19 pandemic.

A terminally ill father goes on a road trip with his daughter to help her find her estranged mother.

After previously only being available on PVOD, the biggest Spider-Man movie of all time is finally included at no additional cost with a streaming service.

The full list of movies and shows hitting Prime Video Canada this month can be found here.

Twelve Canadian drag queens compete for the title of Canada’s Next Drag Superstar and a $100,000 prize. Notably, this season features the first-ever competitors from Saskatchewan and Newfoundland and Labrador.

The full list of movies and shows hitting Crave this month can be found here.

In this feature-length take on the popular Fox animated sitcom, Bob and his family must pay back a loan after a sinkhole opens in front of their restaurant.

The full list of what’s hitting Disney+ Canada this month can be found here.

D.B. Cooper: Where Are You?

This docuseries unpacks the decades-old mystery surrounding infamous American criminal D.B. Cooper, who successfully parachuted off a plane with a bag of cash.

Stream D.B. Cooper: Where Are You? here.

A father takes extreme measures to bring his daughter’s killer to justice.

Years after a viral outbreak decimates humanity, Jade Wesker embarks on a journey to take down those responsible.

The full list of movies and shows hitting Netflix Canada this month can be found here.