Under the Banner of Heaven, starring Andrew Garfield, comes to Disney+ Canada on June 8 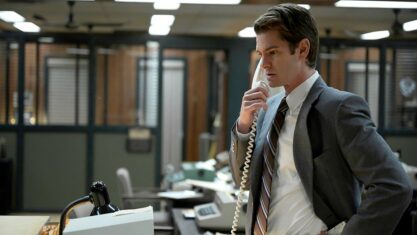 Disney has confirmed that its acclaimed drama series Under the Banner of Heaven will premiere on Disney+ Canada on June 8th.

The true crime series, which debuted on Hulu in the U.S. on April 28th, is based on Jon Krakauer’s 2003 non-fiction book of the same name. In Canada, it will come to Disney+’s Star banner, although it’s unclear whether the entire series will drop on June 8th — given that all seven episodes will be available on Hulu by that date — or if it will follow a weekly release schedule. MobileSyrup has reached out to Disney for clarification and will update this story once a response has been received.

Under the Banner of Heaven follows a police detective who finds his faith shaken when investigating the murder of a Mormon mother and her baby daughter, which appears to involve The Church of Jesus Christ of Latter-day Saints (LDS Church).

Notably, the series marks Andrew Garfield’s first lead role in a TV series, following a stint of acclaimed performances in films like The Social Network, Hacksaw Ridge and Tick, Tick…boom! Of course, the two-time Oscar nominee is also coming off last year’s Spider-Man: No Way Home, in which he made his highly anticipated return as a multiversal Peter Parker/Spider-Man.

Sam Worthington (Avatar), Daisy Edgar-Jones (Fresh), Denise Gough (Too Close) and Wyatt Russell (Lodge 49) co-star. It’s also worth noting that Under the Banner of Heaven was filmed in Calgary.