If you had told me that this week I’d learn about a fence-building company that employs 350 people and raised a total of $53 million, I’d ask you to pass the bong, because I want some of what you’re smoking. But that’s exactly what Ergeon has been stealthily building over the past 4 years. It just launched in Georgia, in addition to Texas and California, and recently closed a Series B funding round.

The company was co-founded by Jiayue He, who is a licensed contractor, and Odysseas Tsatalos, who co-founded now-IPO’d Upwork and accounting software Intacct, which was acquired by Sage for $850 million.

The company’s pitch is simple — it enables anyone to order construction projects like fences, driveways and more in the same way they order other products and services online. The company’s current sweet spot is projects that are too small to warrant a general contractor but that could really benefit from one. Ergeon does the quoting and owns the customer relationship, and then farms the actual work out to local contractors.

I spoke with the company’s CEO, Jenny He, to learn more about the what, why and huh? of the company:

“I had been exposed to construction at a very early age. My parents were civil engineers, and they worked on the biggest Dam in China a long, long time ago. I did electrical engineering for my undergrad, followed by a PhD in computer science. Then I was at McKinsey for seven years, where I worked primarily in the industrial sector,” explains He, outlining her path to Ergeon. “I met my co-founder at his previous startup, where he was the founder. He has been more of a career CTO, always just fascinated about how tech changes the way people work. He and I both came at it with our interests overlapping: how do we use tech to transform more skilled blue-collar work?”

He explains that the duo chose construction partly because the sector suffers from one of the worst labor shortages in the U.S., claiming that there are more than a million unfilled jobs at any given time. The company claims the industry is worth $1.5 trillion in the U.S. alone. 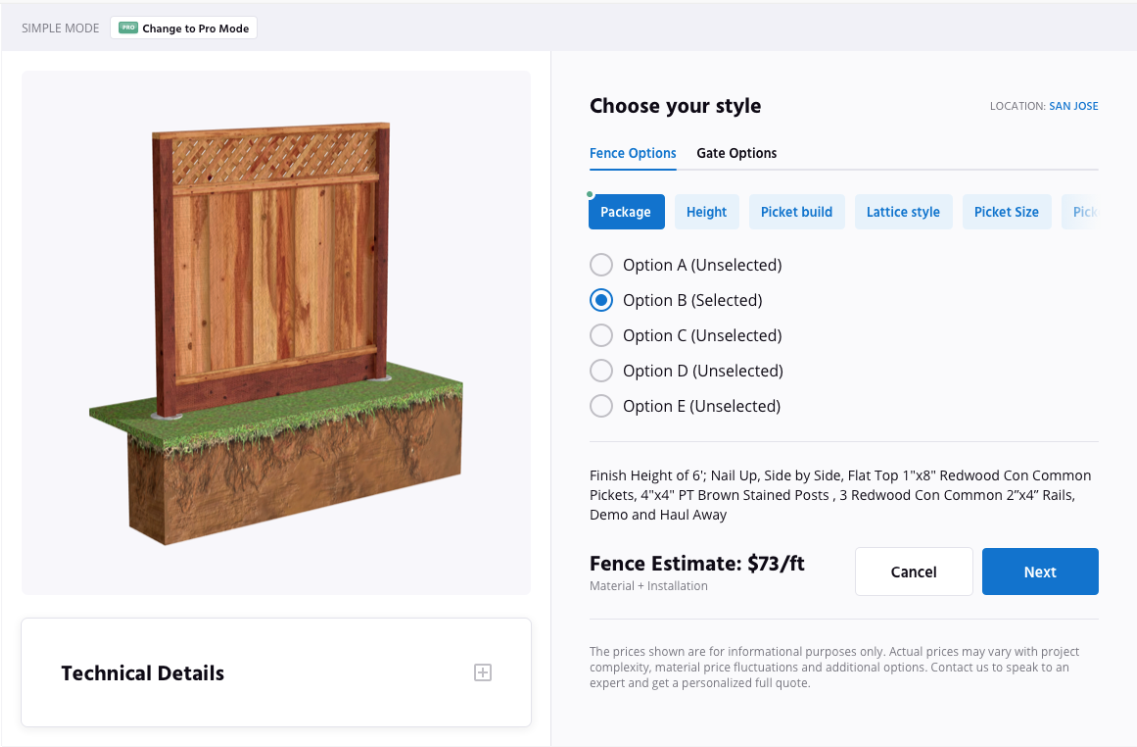 Using a quoting tool means installing a fence becomes much more transparent — the quoting, not the fence itself, which would defy the purpose of a fence. Image Credit: Ergeon

“From a tech trends perspective, we started to see how more tech was starting to be built for the commercial side of construction; for big projects. There have been advances with CAD and what you can do on mobile devices such as phones and tablets,” says He, but reiterating that the tech wasn’t being applied to the residential construction market. “We felt the advantage of the residential space as a starting place was that you do thousands of projects, and you can start to build some pretty meaningful tech. On the commercial side, there’s always a way of making money on a billion dollar project. When you are talking about projects for the average homeowner, things are different. If you have a project it’s not that attractive for the contractor — you don’t have a billion dollars to offer them — the results can be of very inconsistent quality depending on who you manage to get. There’s often delays, and everything runs you over budget. The whole process is just very painful. I just want to be able to book something the way I book everything else in my life: Online.”

Ergeon handles all the contact between the contractor and the homeowner, and even guarantees the work is done well. If a fence blows over a couple of months after it was installed, they make it right, the company claims.

“We do a remote session with you, where you show us what you need. We can take all the measurements remotely and we can do the entire assessment remotely as well, including your site conditions. After that, we communicate with you in the medium you prefer. If you want a text or email or a call — that’s how we communicate with you. We manage the project end to end so you don’t have to worry about [it] and you don’t actually need to talk to the contractor who comes to your home. Billing and everything else is all done online,” says He.

The company claims that it’s not just the customers who love the product, but that the contractors are pretty psyched about it as well.

“We think about the contractors as entrepreneurs. They run a small business, and it’s much tougher for them than for me,” explains He, suggesting that as a tech startup, she can raise funding, get resources. “Given there is a huge shortage of skilled workers in construction — we want to close that capacity gap, and we can do that by really empowering them to grow their businesses with us. We take the front office and back office work off them, and give them an economy of scale that they wouldn’t otherwise enjoy. This shows up in terms of material purchases, marketing, and other ways. They can grow with us. If you need to scale every single aspect of business, it’s actually pretty tough.”

Of course, even though the company started out making fence-building easy, this is the stepping-stone toward a far broader set of features. The company is planning to start doing driveways next, followed by a number of other home improvement projects, with the ultimate goal of being able to do most construction projects. In addition, the company has a lot of geographic growth ahead of it:

“We are currently only three states, and for the type of work we do, we are now covering about 14% of the US households,” explains He. “We are looking to expand that from 14% to 40% in the next couple of years. The second piece is of course adding more products to our portfolio. We started with fences because they have several unique properties that make them a good entryway to build your tech stack and to have a relatively high volume. Of course, our vision is to go toward building the entire home. It’s just one piece at a time.”

The company just closed its Series B financing of $40 million led by Prysm, with participation from GGV, DST, Basis Set and Metaprop. The company claims it employs 350 people across 42 countries using a remote-first approach.