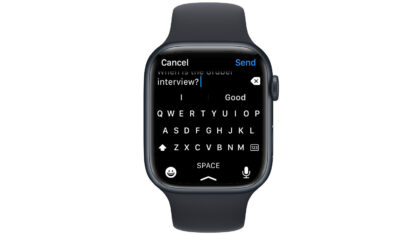 On the surface, watchOS 9 seems like a relatively low-key update to Apple’s smartwatch operating system, but now that the dust has settled surrounding WWDC 2022’s keynote, more information about the OS is starting to appear.

This keyboard suggests words as the user types in an effort to predict what you might want to add next to your message. In the context of a smartwatch, this feature could be particularly useful when you’re trying to send a quick message.

QuickType first made its way to the iPhone alongside iOS 8 back in 2014. Other notable watchOS 9 features include expanded sleep monitoring, medication tracking and several new Watch Faces.

The first version of Apple’s developer beta for watchOS 9 is currently available. A public beta will follow in July and then the full version of the update is expected to drop this fall.

For all of the Apple news from WWDC 2022, follow this link.