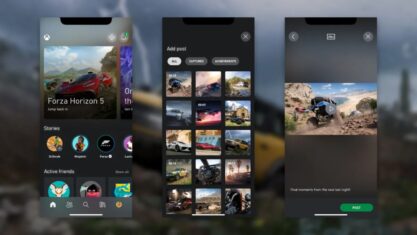 Microsoft is adding a core feature from several notable social media platforms to its Xbox app. Soon, Xbox-supported regions will be able to create, share, and view stories with their friends on the Xbox app on iOS and Android.

As a part of the May update, the Xbox app is receiving a fairly significant new feature. Previously, stories were reserved for Microsoft itself to highlight new games. Now, Xbox users can share gaming highlights with friends.

Currently, Xbox users in Australia have access to the new feature within the app. However, Microsoft claims the feature is “coming to more Xbox supported regions soon.” Once users have access to it, they can share game clips, screenshots, and achievements with friends. Users can also reply to the stories of friends with a message or quick reply.

Stories are found on the right of the Home screen on the Xbox app. As with other social media platforms, creating stories is as easy as clicking the ‘+’ button on your Gamertag within the stories channel. The user is then brought to the screen with access to all screenshots and gaming clips. Users select what to add, create an optional caption, and post.

Unlike most other social platforms, Xbox app stories last 72 hours before disappearing. Anything the user shares is also available on the activity feed within their profile.

Once enabled, this feature supports gaming experiences when network conditions may be constrained.

On top of announcing the May update for the Xbox app, check out the new Xbox Game Pass titles arriving this month.