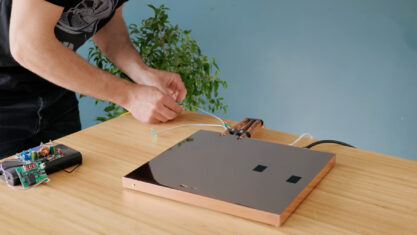 So naturally, YouTuber DIY Perks took it upon himself to rectify the situation by creating an unofficial ‘slim’ version of the current-gen console that’s still capable of running like normal.

As you may have already guessed, the project didn’t exactly go as planned.

First, DIY Perks started by removing all of the console’s cooling components and swapped them for a homemade water-cooling system created out of copper sheets. Unfortunately, a basket he was using to balance the power brick fell over and airflow was disrupted, causing the PS5 to overheat.

Of course, Perks eventually resolved the issue or there wouldn’t be a YouTube video about the process. Given how hot the normal PS5 runs, it’s amazing Perks was able to pull this Frankenstein-like setup off that’s capable of running games for several hours.

The full video is available on DIY Perks’ YouTube channel. At some point, Sony will likely release its own PS5 slim, but given the console only launched two years ago, it will likely be at least a few years before it appears.