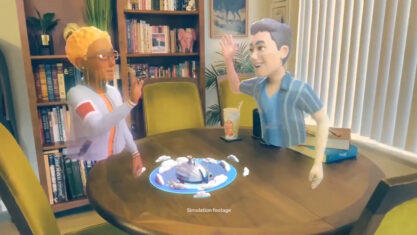 Meta is serious about dipping its toes in the augmented reality (AR) glasses game in addition to its push into the metaverse, as echoed in a recent report by The Verge.

The glasses, which are currently in development under Project Nazaré, were first talked about by the Menlo Park, California-based company’s CEO Mark Zuckerberg at Facebook Connect 2021. At the event, Zuckerberg outlined the company’s progress in the AR/VR space by mentioning the recently released Ray-Ban Stories. However, those were just small steps “along the path to an embodied internet,” said Zuckerberg. “The ultimate goal here is true Augmented Reality glasses.”

At the time, Zuckerberg had said that Project Nazaré is still “a few years out.” Meta reportedly plans to launch the glasses sometime in 2024, with upgraded versions arriving by 2026 and 2028.

The first Nazaré headset is designed to work without connecting to a smartphone and instead will connect to a proprietary “phone-shaped device” that takes some of the computing load off the glasses. A former Meta employee told The Verge that Zuckerberg “wants it to be an iPhone moment,” referring to the initial release of the glasses sometime in 2024.

Zuckerberg has long been adamant about making the company’s push into the metaverse a serious endeavour. However, Meta’s goal to revolutionize and create a connected digital world may not instantly invoke the visions of Steve Jobs unveiling the first iPhone. The glasses merely act as an admission ticket to a movie theatre, and anyone keen to experience Zuckerberg’s full vision of the metaverse will need to purchase them first.

Want to learn more about Meta’s capabilities in the AR/VR space and what might be on the table when Project Nazaré finally drops? Check out our review of the Ray-Ban Stories.